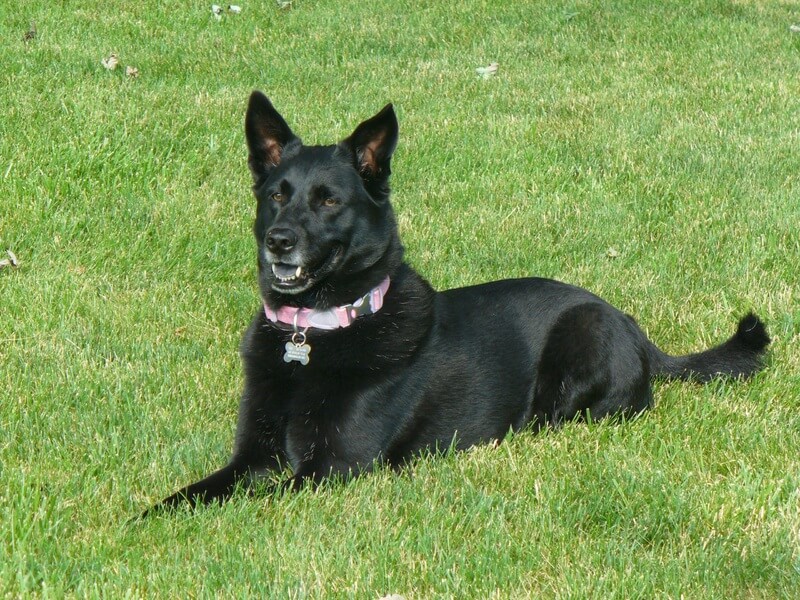 The Ca de bestiar or mallorcan shepherd dog (Canis lupus familiaris) is a medium-sized dog with black hair, it looks a lot like a black Labrador and has lived on Majorcan farms for many centuries. It is of robust build, with muscular hind limbs, allowing it to successfully herd farm animals for hours without tiring.

This working dog requires a lot of exercise to keep him happy, and if he is not kept on a farm, he should be provided with a variety of activities each day to ensure his needs are met. Unfortunately, the Mallorcan shepherd has a reputation for being territorial, a trait that is difficult to train and that can cause difficulties when it comes to meeting new people or pets.

The Ca de bestiar is a medium-sized dog similar in appearance to the black Labrador, although with a more athletic build. Designed for herding sheep and cattle, it is essential that this breed is dexterous with its feet and has good overall musculature.

The muzzle of this dog is longer than the skull and contains a straight nasal bridge. Their black nose blends into their black fur and can be difficult to distinguish in the dark. Their eyes are relatively small and can be amber or brown in color, set far apart on the face. His dangling ears are not to be cropped and are medium in size, hanging close to his face. Its body is built to be functional, with a short sturdy neck, a deep chest, and a straight back, supported by muscular limbs. Its compact legs allow an agile gait and end in black claws. The tail must not be docked and reaches approximately the level of the hocks.

The black fur of the ca de bestiar is short and straight. It has a thin layer of inner hair. Sometimes with a small amount of white hair on the chest, although not anywhere else. A variant of the Mallorca Shepherd Dog has been described with a longer black coat (7 cm in length instead of 2 cm). While it can be assumed that a black coat is far from ideal in a warm Mediterranean climate, these dogs anecdotally do well in hot climates.

Most Mallorcan sheepdogs are between 56cm and 61cm, and weigh around 35-40kg.

The ca de bestiar has the temperament you would expect in a farm dog: energetic, protective and courageous. They will diligently patrol your land, herd your flock, and guard your territory. They will not hesitate to warn any intruder and can become aggressive if the situation warrants. His fearless demeanor makes him a stubborn dog that often develops a dominant personality.

As an independent soul, the Mallorcan shepherd is used to working alone and is content to be the only dog ​​in the house. Despite this, he will join his master, always ready to come to his defense. When new people come to your home, they are wary of them and can be hostile. Owners should strive to ensure that these dogs are socialized from an early age and do not become a danger to new guests in the home. The territorial nature of the Mallorca Shepherd is an inherent trait and it is unlikely that owners will be able to eradicate it completely.

As it is believed that the Mallorcan shepherd was formerly used as a fighting dog and is typically willful and defensive, not recommended as a breed for a first time owner or for a family with young children.

They adapt well to warm environments, even though they are black in color, they prefer to live outdoors in hot and dry environments.

Being an energetic breed, it needs a high-quality dry food that contains approximately 20% protein and 7% fat. Make sure their food has whole meat proteins like fish, beef, or poultry.

The first heat cycle of the car de bestiar usually occurs between 6 and 12 months of age; for some small breeds, starting at 5 months, and for some large and giant breeds, the first cycle may not occur until 14 months of age or older.

On average, female dogs have two cycles per year. The heat cycle lasts an average of 12-21 days, but can be as short as a few days or four weeks. The length of the heat period varies greatly between breeds and individual bitches.

on the other side The length of a cycle varies greatly. When in doubt, assume the longer end of the range for cycle length. Bleeding occurs before the female is receptive to the male (allowing for mounting by the male), but male dogs will be highly attracted to the female in the proestrus phase.

Bitches can get pregnant during their first heat cycle, but this is not advisable as a 6-month-old female has not fully grown / matured yet, and complications for the mother and puppies are more likely.

Most members of the breed live from 11 to 13 years. They are usually hardy and healthy, but owners and breeders should be on the lookout for the following conditions:

Dogs with a deep chest have been reported to be more susceptible to developing gastric bloat. It is difficult to predict which dogs will develop gastric distention in their lifetime and which will not. Affected dogs will have a visibly “swollen” abdomen (as if they were filled with air). They will appear very uncomfortable, often walking around and panting.

Some dogs begin to retch unproductively. In the most severe cases, the dog’s stomach will twist, trapping the gas inside. This is known as gastric dilation-volvulus and is a life-threatening emergency that requires immediate surgical correction for the dog to survive.

Although any breed of dog can develop hip dysplasia, it is usually medium or large purebred dogs that suffer from it. Hip dysplasia can be transmitted genetically and is influenced by several factors, such as diet and lifestyle. Although the early signs of the disease can be subtle, dogs in the later stages are visibly lame and uncomfortable.

They often lose muscle mass in their hind limbs and find it difficult to stand and walk. There are several treatment options, such as oral medications, surgeries, and lifestyle modifications. Most dogs will receive an evolutionary and multimodal treatment plan during their lifetime.

Relationship with humans (Training and education)

It is essential that training begins as early as possible in the dog’s life to ensure the development of sensible behaviors within the home. Due to this dog’s tendency to be stubborn, the owner must assert his position of dominance from the start. As an intelligent dog, the ca de bestiar responds best to training with positive reinforcement. Consistency is important, and all members of the family should have the same rules for the dog.

When it comes to his job he instinctively knows how to herd, patrol, and guard and needs little training to carry out these tasks. Owners should focus on proper and thorough socialization of this breed as puppies, exposing them to a wide variety of people and animals.

Also known as Ca de Bestiar or Perro de Pastor Mallorquín, it is believed that the Perro de Pastor de Mallorca has existed since ancient times. Over the years this dog would have been crossed with a variety of local Mallorcan dogs, as well as other European Sheepdogs, and it was not until 1970 that restrictions were placed on its breeding. In fact, their breed standard wasn’t drawn up until 1980. It was in 2006 that the UKC recognized the breed within its group of sheepdogs.

Appreciated throughout the centuries by the Spanish for its ability to be a versatile farm dog, the ca de bestiar was used both to herd flocks and to guard property and animals. The Mallorcan Shepherd Dog has also been reported to have been widely used in dogfighting, a practice that is now illegal. Although it is still used on farms today, and is also often kept as a companion animal, this breed is rarely seen internationally and is considered a rare breed.