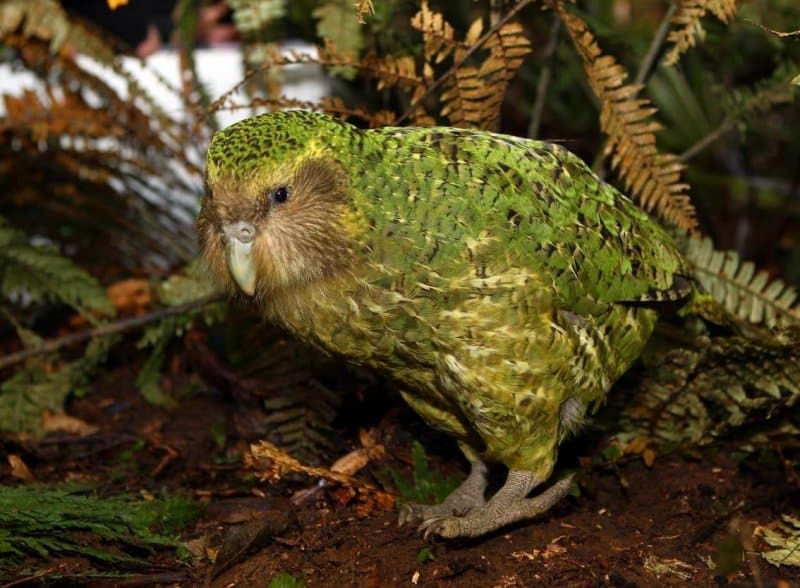 The Kakapo, or Kákapu (Strigops habroptilus) it is a land bird, which means it cannot fly. It is a large, nocturnal parrot, unable to fly, and they have mating rites and displays, a true rarity. It is also critically endangered, and is the subject of considerable conservation attention. Before the arrival of humans it was common in all the forests of New Zealand, but predation by mammals introduced by humans brought it to the brink of extinction, it is at a critical point, there were around 50 birds left only in the middle of the 1990s. and The relocation of the entire population to predator-free islands and intensive intervention at all stages of their life has resulted in a steady increase in their numbers.

also The Kakapo have no close relatives.

The kakapo is a nocturnal parrot

The kakapo is a large parrot that lives in the forest and does not fly, with a pale, squashed face like that of an owl. They are moss green with yellow and black spots above, and similar but more yellow below. The beak is gray, and the legs are gray with pale plants.

The kaka (Nestor meridionalis) and the kea (Nestor notabilis) are the only species the kakapo can be confused with, but its moss-green color, large size, lack of flight, and nocturnal habits make it easy to distinguish. It is also highly unlikely that any kakapo exist other than in a few managed sites, so the chances of misidentification are very low.

The Kakapo is nocturnal and solitary, occupying the same range for many years. They feed on the ground and climb trees. They often jump out of trees and flap their wings, but at best they achieve a controlled fall.

Once found throughout New Zealand, the kakapo began to decline in range and abundance after the arrival of the Maori. They disappeared from the North Island around 1930, but persisted longer in the more humid parts of the South Island. The last birds died in Fiordland in the late 1980s. A population of less than two hundred birds was discovered on Stewart Island in 1977, but this population was also declining due to cat predation. During the 1980s and 1990s, the entire known population was transferred to Whenua Hou / Codfish Island, off the coast of Stewart Island, Maud Island in the Marlborough Sounds, and Hauturu / Little Barrier Island in the Hauraki Gulf. Since then, the birds have moved between Whenua Hou, Maud Island and Hauturu, as well as to and from the new predator-free islands Chalky and Anchor in Fiordland. Currently, the Kakapo are only found on forested islands, although they previously appeared to have inhabited a wide range of vegetation types. 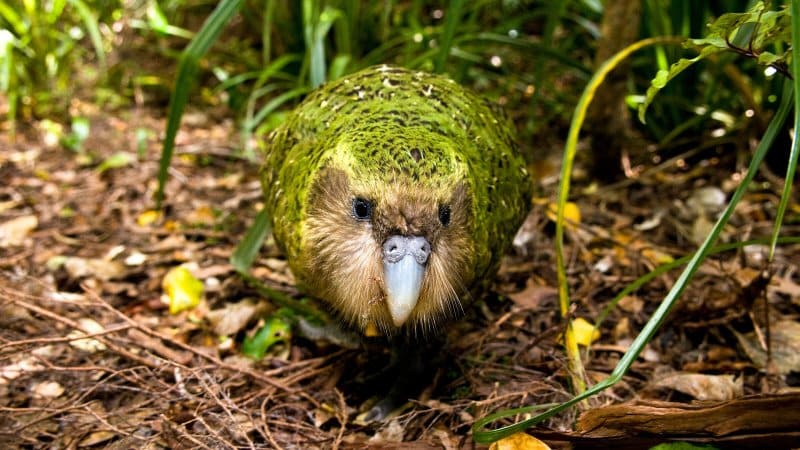 The kakapo has an owl-like facial shape

The adult kakapo is vulnerable to predation by cats and stoats, and its eggs and chicks can be slaughtered by rats. The females are the only ones who incubate the eggs and raise the chicks. Because they must spend long periods away from nest feeding, eggs and chicks are particularly vulnerable to predation when the nest is unattended. Chick rearing is lengthy, and nests become smelly and easy for predators to find. Away from the nests, the kakapo usually freezes and depends on a plumage coloration that serves to camouflage itself and to hide from predators. While this strategy worked when the main predators were birds that hunted by sight, it is a completely ineffective strategy to avoid mammalian predators that hunt by smell.

Kakapo reproduce in summer and fall, but only in years of good fruit abundance. In the southern islands of New Zealand they reproduce when the rimu trees, which is once every 2 to 4 years. Elsewhere in New Zealand they probably nested when southern beech trees were planted, but breeding triggers are unknown in some northern locations, including Hauturu.

Males call from tracking systems to attract females to mate. The males do not participate in the incubation or the rearing of the chicks. Nests are found above or below ground in natural cavities or under dense vegetation. The eggs are laid in a shallow depression in the ground or rotten wood, which is repeatedly overturned before and during incubation.

Attempts to protect the Kakapo from introduced predators by transferring them to the Island of Resolution in the 1890s failed when the sailors swam to the island. In the 1980s and 1990s, transfers to the completely predator-free Maud Island and Hauturu and Whenua Hou slowed the decline of the kakapo. However, the population did not begin to increase until the birds were managed more intensively. Intensive management included moving birds from one island to another, protecting nests from rats, supplemental feeding of adults, careful monitoring of eggs and young, rescue and manual rearing of chicks. that were lost.

It has very low genetic diversity and, as a consequence, low fertility. Much of recent conservation management has focused on mating management and the use of artificial insemination to minimize further genetic loss.