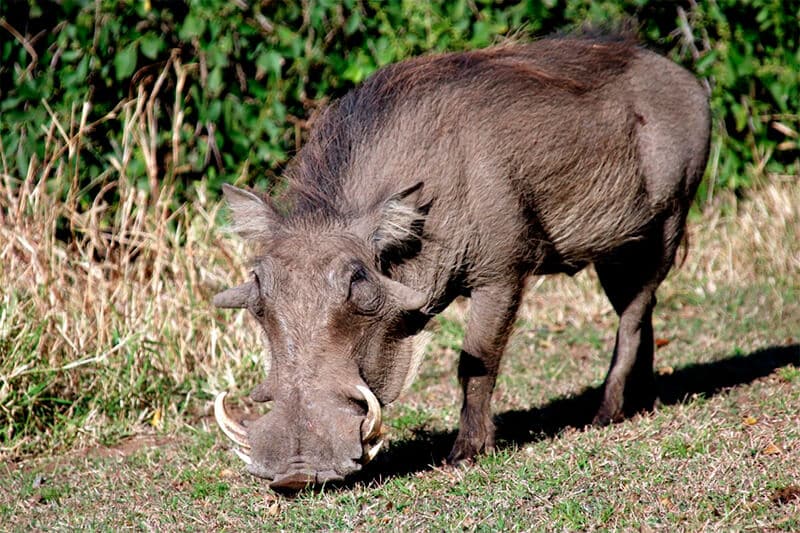 The wild pig It is a kind of wild pig. They are also commonly known as European wild hogs, hogs, or simply wild boar. They predominate in Europe, North Africa and almost all of Asia.

There are many subspecies of wild boar, although it is difficult to classify them all, since they can interbreed without difficulty.

But it is widely agreed that there are only four major subspecies determined by location. The species are similar to each other, although they vary in size, appearance, and color depending on their geographic location.

wild boar is a medium-sized mammal with a large head, massive build, short, thin legs. The trunk is short and solid, while the hindquarters are underdeveloped. also The shoulder blades are raised in a hump and the neck is short and thick to the point of being almost immobile.

with males being 10% larger and 30% heavier than females. They also have a mane that runs along the entire back that is more evident during winter.

The head occupies a third of the total length of the animal and is very suitable for burrowing. Its powerful neck muscles allow it to lift large amounts of dirt and it is capable of digging 8 – 10 m in frozen ground and lifting rocks weighing 40 – 50 kg. It can run at a maximum speed of 40km / h and jump to a height of 150cm.

The muzzle is one of the most representative features of the animal. It has a cartilaginous disc at the end, which is supported by a small bone called the prenasal bone. This allows it to be used as a digger when foraging for food.

All species have fangs on the lower lip, although that of males is larger than that of females. They are curved at the level of the mouth. In addition, the males also have an extra tusk located on the upper lip, which is used as a sharpener for the lower tusks. The fangs can measure up to 6 cm in length.

Their eyesight is poor due to their very small eyes, but they supplement this cadence with their long, straight snout with which they have an extraordinarily keen sense of smell.

It has a consistent and thick double coat of hair consisting of a harder and bristly top coat and a softer undercoat. The hair that runs along the back is longer than the rest. During winter, the coat is longer and thicker.

The color varies between brown, black, red or dark gray that changes according to the subspecies. For example, jabablies located in Central Europe are brown, while those located in Eastern Europe are black.

It is tremendously adaptable when found in a wide variety of different habitats, it is capable of feeding on almost anything and it is not only a good runner, but it is also an excellent swimmer.

The sounds made can be divided into three categories:

The wild boar is a nocturnal animal, therefore it is only active at night. During the day they hide in their burrow to sleep for about 12 hours.

Females are very sociable animals. They inhabit loose territories in groups called probes, which range between 6 – 30 individuals. They are made up of breeding females and their young. Sometimes they are in the territories of other groups, but they do not tend to mix. However, males are solitary animals for most of the year, except for the breeding stage, where they can be seen fighting with other males to mate with a female.

Wild boars are tremendously adaptable to a wide variety of habitats from boreal taigas to deserts.

In order for it to survive in a specific area, it only needs three conditions: Areas with a high density of trees that provide protection against predators, water for drinking and bathing, and the absence of regular snowfalls.

Although it can survive in many, many habitats, they tend to prefer broadleaf deciduous forest areas where the vegetation is incredibly dense.

The wild boar is the land mammal with the largest “conquered” territory. Its native distribution goes from Western Europe to Japan, and as far south as Indonesia.

The four subspecies are defined around their location. One is found in Europe, Northwest Africa, and West Asia; the second is found in North Asia and Japan; the third inhabits the rainforests of India, Southeast Asia and the Far East, and the last is found only in Indonesia.

The wild boar is an omnivorous animal that feeds mainly on plants. 90% of the diet is made up of plant matter including: young leaves, berries, herbs and fruits, and it digs roots and bulbs out of the ground with its tough snouts.

Those who live in regions that experience seasonal changes have adapted and have replaced the fruits and flowers with protein-rich nuts, such as acorn, which are available in autumn.

They will supplement their diet with eggs, mice, lizards, worms, and even snakes. Unlike other animals, it has no problem killing the abandoned prey of another animal.

Wild boar are prey to many predators in all their natural habitats. Their most common predators are prey for big cats such as leopards, lynxes and tigers. It is also preyed upon by wolves, bears, and humans.

The female gives birth between 4 – 6 piglets. In a nest nestled in dense thickets, made up of leaves, grasses, and moss.

The mother will stay with the piglets during their first week of life to protect them from predators.

Piglets are very peculiar, since they have a light brown hair, with cream and brown stripes along their backs, which gives them camouflage. These stingrays begin to shed between 4 – 4 months of age.

At two months of age, they will move away from the nest a bit to begin learning to hunt. About 7 months of age they will become independent and will be tornadoes of a reddish color. Hair will not turn dark until it is about a year old.

Wild boar is classified by the IUCN as a species of least concern. But the species as a whole is being threatened by habitat loss from deforestation and hunting.

Although in certain areas such as continental Europe, Poland and Pakistan, the species has increased the population. It is thought to be due to the mixture of several factors, including the decline of their main predators, their greater protection, and the more regulated hunting of them in their native regions.

Since the beginning, due to its great strength, speed and ferocity, it has been one of the favorite animals to hunt. In certain parts of Europe and India it is still hunted with dogs, but the spear has been replaced by the pistol.

Not only were they hunted for their meat, their fangs were also coveted as trophies. This caused them to become extinct in some areas. Currently, humans have introduced some species to numerous countries around the world, so that it can be hunted and eaten. These countries are: Hawaii, the Galapagos Islands, Fiji, New Zealand, Australia, South Africa, Sweden and Norway.

In Europe it is one of the four heraldic beasts of the hunt and was a sign of identity of Richard III, King of England. For a long time, the head was considered a delicacy.