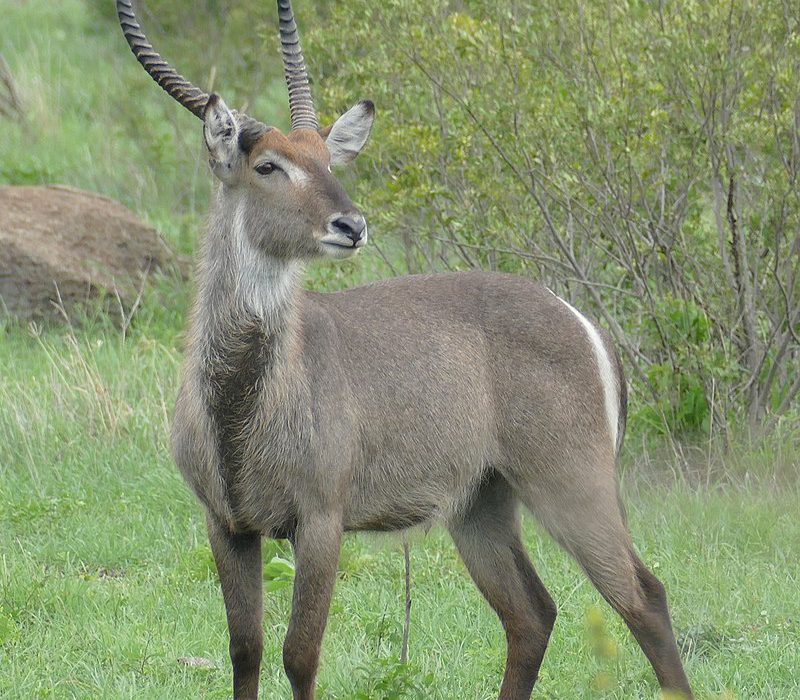 Kobos have long bodies and necks but short legs. Their hair is coarse and long, forming small manes on the neck. They present colors that go from gray to brown, which darken with age. The lower part of the legs is black and they present a very characteristic white ring on the back of their hindquarters. Only the males have a pair of heavy and very ringed horns, which can measure up to a meter in length. He is a great runner, but prefers to take refuge in the water when he senses danger.

It has glands that produce a secretion of waterproofing action with a strong musk-like odor. It seems that this aroma permeates the meat, especially that of old individuals, and makes them unappetizing to lions, hyenas and leopards.

They live in wide areas shared by many non-territorial males and females. The size of its distribution area depends on the quality of the habitat, the population and the age of the individuals, being broader the healthier and younger they are. The different zones can overlap, forming herds with an average of 5-10 individuals, in these groups there is no established hierarchical rank.

Kobo activity is affected depending on the season, habitat, pasture conditions or distance to water, so that when environmental conditions are drier and there is less water availability, they need to rest more weather.

The number of predators in their range also significantly affects their activity and the number of individuals in the population.

Their predators are mainly lions, hyenas, and leopards, which generally attack newborns.

It is easily tamed, although the unpleasant smell that its skin gives off makes it an unwelcome companion. Its meat is not edible by humans.