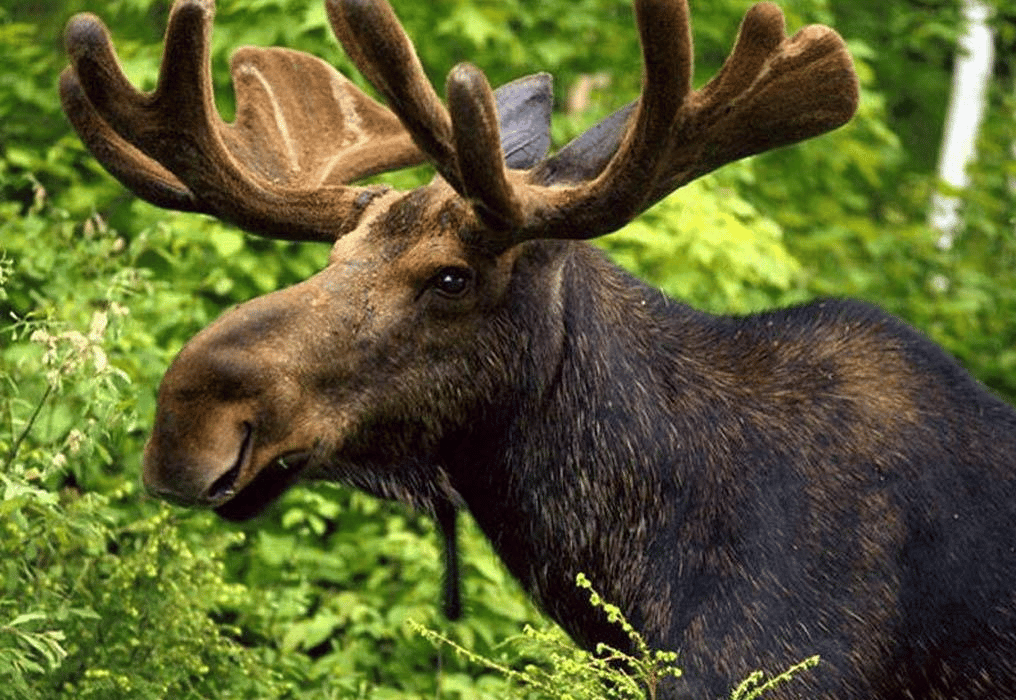 The I raised or anta (Alces alces) is a species of artiodactyl mammal of the cervid family and the genus Moose that inhabits the Nordic forests of America and Europe.

Its range was much larger, but due to the poaching to which it has been subjected for centuries it has caused a drastic decrease. Anyway, there are about two million copies.

The elk is the largest deer there is, being characteristic and distinctive the large horns that the male has and its ramifications at the end.

Wilson and Reeder, in Mammal Species of the World (2005), consider the Eurasian elk (Alces alces) and the American moose (Alces americanus) as different species, based on documented differences in karyotype, body size, shape of the premaxilla, coloration and structure and dimensions of the antler. There is a wide area of ​​hybridization between the two species: in Central Siberia and north of Mongolia.

They have various adaptations to the cold environment, one of the main ones being a large nose with a large flow of blood to warm the air before it reaches your lungs.

The color of its coat is dark brown to chestnut.

The sexual dysmorphism is in addition to the size, in the antlers that the males have, the females do not have it and also a “double chin” that the males present under their head.

It is herbivorous, feeding on leaves and twigs of trees and shrubs, tender stems and the bark of trees, as well as aquatic plants in lakes and rivers, being able to dive in search of water lilies. Their long legs allow them to reach the leaves of the high branches; to obtain aquatic vegetables they sink halfway into the water, and to graze they often kneel. You need about 19.5 kg of food a day.

Heat occurs from September to October.3 At this time, both sexes make squeaky nasal calls. The duration of the gestation period is between 242 and 250 days, after which the young females give birth to one calf and the older females two, or exceptionally three. The young weigh at birth from 11 to 16 kg, and are able to follow their mother at two or three days of age, staying with her until about ten and fifteen days before the birth of the next calf, at which time they are expelled by the mother.

In summer, moose live alone or in family groups; in winter, after heat, they regroup in small herds comprising 5 to 10 individuals. With the exception of temporary migrations — undoubtedly influenced by population densities and the careers they undertake at the time of heat — moose remain loyal to their territories, which they otherwise do not defend in any way. Moose are oriented primarily by hearing and smell; his eyesight is quite weak.

In the Middle Ages it was still possible to find the Eurasian elk in the great forests of central and western Europe; but later it was completely exterminated in those areas. For some decades, protection measures have led to a new multiplication of moose populations, which begin to spread south and towards the borders of their old range, as well as north towards the tundra. They can be found in immense territories of Russia and Poland, and their outpost also reaches the Czech Republic, Germany and Austria. It is also found in Mongolia, Manchuria, and Siberia.

The moose is found in Alaska, Canada, and the northern United States.

It is found in wooded terrain, from mountains to farmland, preferably lakes and river valleys.

Classified as “Least Concern” on the IUCN Red List

Since the 1990s, moose populations have declined dramatically in almost every part of North America. The exact cause of the matrix outside is not determined, but appears to be a combination of factors, from changes in habitat and heat stress caused by global warming, liver flukes, brain worms, unregulated hunting, reintroduction of the wolves, and tick infestation.