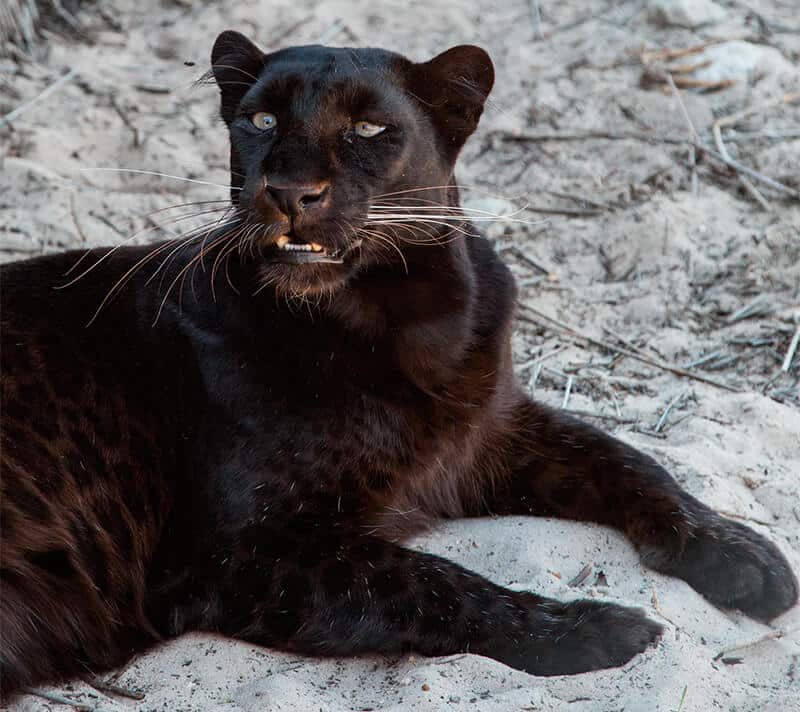 The black panther is not an animal species per se, but is a variation of the skin pigment called melanism, which occurs in some species of big cats of the genus Panthera that includes five different species: the leopard (Panthera pardus), the Jaguar (Phantera onca), the Lion (Panthera leo), the Tiger (Panthera tigris) and the Snow Leopard (Panthera uncia).

Melanism occurs more frequently in species such as the leopard (Panthera pardus) or the Jaguar (Phantera onca), although it also occurs, less frequently, in cougars (Puma concolor).

In the jaguar it is produced by a dominant allele and in the leopard by a recessive allele. The skin of a black panther is black or dark brown and with emerald green eyes. The black pigment spreads throughout the body, including the tail.

If we made a careful examination we would realize that the stains are still present but are hidden by excess melanin, creating an effect very similar to printed silk.

Melanistic and non-melanistic panthers can be littermates. Melanism is more common in dense forest areas where light is scarce, which gives the individual a selective advantage over other non-melanistic members. Otherwise it is entirely equal to the species to which it belongs.

Among leopards, menalism manifests itself in five subspecies: Java leopard (P. p. Melas), african leopard (P. p. Pardus), indian leopard (P. p. Fusca), Indochinese leopard (P. p. Delacouri), sri lankan leopard (P. p. Kotiya). Although there have also been records in two other subspecies, in captivity: The arabian leopard and the amur leopard (P. p. Orientalis). Black leopards are more prevalent in the equatorial rainforest of the Malaysian peninsula and in some African mountains such as Mount Keyna. It can also be found in Java, and in heavily forested areas in southwestern China, Myanmar, Assam and Nepal, in Travancore. In some areas of India, they are much more numerous than the common leopards.

In jaguars, the malanism allele is more dominant than in other species. As a consequence, black jaguars can give birth to black or spotted young, but two common jaguars will only produce normal young. Individuals with multiple allele copies (both parents are black) are much darker than those with only a single black parent. In this case the individual will be dark charcoal in color than black.

In the world there is great confusion around the word panther. Popularly people believe that the panther is a different species, but in reality it is a genus where the lion or the tiger is included, but nobody calls them “Panther”.

In South America, the Jaguar (Phantera onca) is called panther and in North America the genus Puma is called that way. For the rest of the world, especially in Africa and Asia it is used to name the leopard (Panthera pardus).