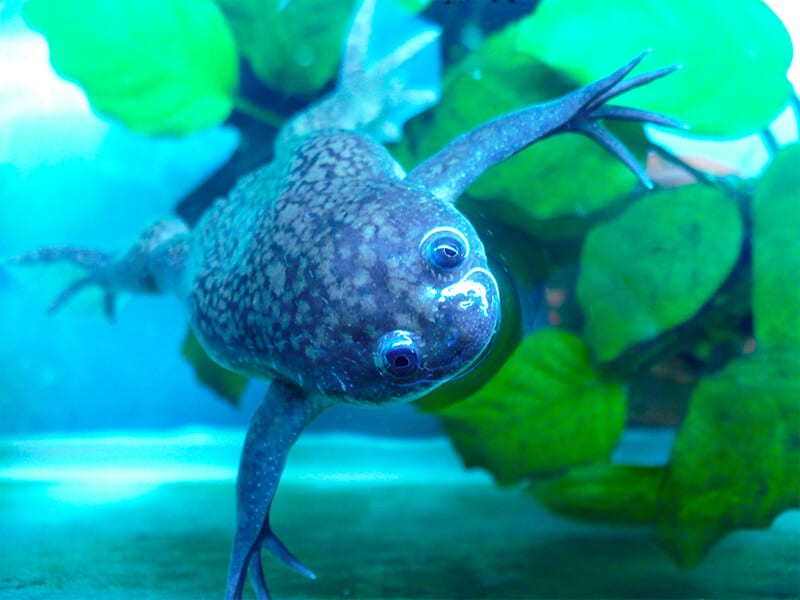 The African clawed frog (Xenopus laevis) It is a totally aquatic amphibian, since it spends almost its entire life in the bottoms of rivers and lakes. Although today it can be found throughout the entire African continent, it owes its name to its South African origin. However, due to their importance in scientific research it is possible to find them also in America and parts of Europe.

An adult African clawed frog is a vertebrate animal, so named because its front legs have sharp nail-like fingers used for hunting, while its hind legs are webbed so it can swim. It is about 12 cm long and weighs about 200 grams.

Its color is greenish gray, although they can be found in other colors such as albino. They have a mottled pattern on their body and on their sides a line of marks on both sides that act as sensors that help them detect possible prey. As with other frogs, such as the striped rocket frog, its eyes and nose are placed on the top of its head to allow them to see and hide its body.

It has been used by the scientific community for all kinds of research because they are amphibian animals, particularly aggressive and ferocious. In 1940 it became the world’s first pregnancy test for humans, which has led to what is found throughout the world today. They can live, in freedom, from 5 to 15 years, although in captivity some adult frogs have lived up to 35 years.

The African clawed frog is a diurnal animal that lives its entire life in water, although it has to stick its head out of the water to breathe. She is a great swimmer, being able to do it in all directions (sideways, backwards, forwards, up and down). It has successfully evolved into a large predator using its nails to hunt its prey.

The African Clawed Frog inhabit the wild, in eastern and southern Africa along the Rift Valley, at the bottom of shallow fast-flowing streams and rivers during the summer and move into flooded forests during the rainy season.

They can also be found in fresh waters outside of Africa due to humans who have introduced it, becoming an invasive species due to the lack of natural predators.

The African clawed frog is a carnivorous amphibian, therefore it is a predator. The favorite prey is the water bug and small fish but it also feeds on small invertebrates such as insects, spiders and worms that are hunted taking advantage of its sharp nails, but it is also known to eat its own skin when it is detached from its body .

When they are bred in captivity their diet is reduced to worms.

The African Clawed Frog can remain hidden most of the time, as only its eyes and nose stick out of the water. In this way, it goes unnoticed by its predators such as rodents, cats, dogs, birds and reptiles, although its greatest predator is the heron.

The African clawed frog are oviparous animals. Females are almost twice the size of males and are capable of reproducing more than once a year. After mating, the female lays thousands of eggs covered by a sticky substance that holds them together. Once hatched, the tadpoles begin their life in the water, although they can approach the banks of rivers if necessary.

The African Clawed Frog has been classified as Least Concern due to its imminent extinction. Their populations have declined in certain areas due to water deterioration and habitat loss.

When used in numerous investigations and teachings, they have become pests by being an invasive species without natural predators that have killed local plants and living beings, forcing humans to decrease the population to avoid major catastrophes.

A number of scientific uses have also been found to improve our lives. The most important was the use of the females as a type of pregnancy test. A hormone produced by human babies, which is transmitted through the mother’s urine, known as HCG induces ovulation in the female African clawed frog.