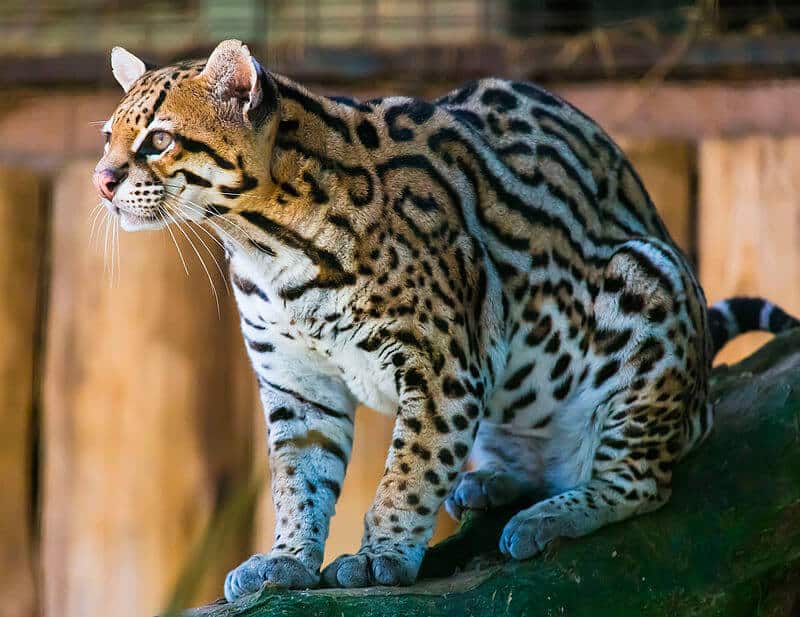 the The ocelot (Leopardus pardalis) is a medium-sized feline animal native to the jungles of South America. It is also known as “Painted Leopard” because of the markings on its skin that show dark rosettes, along with spots and stripes.

In the past, in the 20th century, it was about to become extinct when it was hunted for its skin. Currently the species has recovered little due to efforts to protect it legally.

Apart from running and climbing well, unlike other cats, it is not afraid of water and is a great swimmer.

There are 10 subspecies of ocelots:

It has a short, thick, velvety coat that can range from tawny yellow to reddish gray and is marked with chain-shaped black rosettes on the back and sides. The dark spots on the legs and stripes on the head and face make it easy to distinguish each individual. The tail is long and marked with dark rings and large legs in relation to body size.

Males are larger than females and can grow up to 1 m long with a tail that is half their length. The front teeth are pointed and are used to bite prey and each cheek has bladed teeth for tearing food.

Like all cats except cheetahs, it can retract its claws to prevent dulling when walking.

The ocelot is a solitary animal that establishes territories of up to 30 km2. The size of the territory varies according to the type of environment that surrounds it. Males have territories twice the size of females, and they overlap with a territory of females where the male has rights to reproduce.

They communicate with each other through the use of soft meows, when they are looking for females suitable for reproduction, the meows increase in frequency and become very loud.

Ocelot is thought to be active for 12 hours a day and can travel up to 11 km during that time. Males remain active longer hours than females.

It is a nocturnal animal, therefore, it spends the day sleeping hidden between thick vegetation or in high and leafy branches. To survive at night, it has sight, touch and ears excellently adapted for night hunting.

It is rarely seen, even within its range, as it is incredibly secretive. It spends a lot of time in vegetation and only ventures into open areas at night.

The ocelot lives mainly in the jungles of the Amazon basin. However, they are quite distributed and can be found in a wide variety of habitats, such as: tropical forests, grasslands, mangrove forests and swamps, as long as these areas include dense vegetation where they can hide.

Their ability as swimmers allows them to also live in seasonally flooded forests. Numerous individuals have also been seen living near human settlements.

The ocelot is distributed throughout the South American tropics. But it can also be found from southern Texas to northern Argentina.

It is generally found in areas below 1,200 meters above the sea, but there are exceptions such as those that inhabit the Andes Mountains at 3,800 m.

The ocelot is a carnivorous animal that hunts at night. To capture them, he stalks his prey from the ground. The diet is made up of rodents, rabbits, birds, fish, crabs, lizards, and snakes. Sometimes they can hunt small deer.

When there is not enough food it can hunt monkeys, turtles, armadillos, anteaters and can even attack domestic birds.

The ocelot has several predators in its natural environment, felines such as jaguars and pumas, along with raptors such as the harpy eagle or the anaconda, the largest snake in the world.

As an unnatural predator, it possesses humans who have hunted it for its skin. The deforestation of forests also reduces the population of ocelots.

The ocelot is capable of reproducing throughout the year, but in the northern and southern extremes, reproduction occurs in late summer.

Once the female is fertilized, she will look for a place to give birth. The preferred places are rocks, hollow trees or areas with dense and thorny bushes that offer privacy and protection.

After a gestation period of 85 days, she will give birth to 2 or 3 pups who are born blind and with a thin layer of dark hair. In a month, the hatchlings have grown enough to be aware of their surroundings and the fur will be denser and more colorful. They will pass their mother for a year, when they become fully independent adults, although they may remain in their mother’s territory for a few more years until they establish their own.

The ocelot is registered by the IUCN as a species of least concern, that is, it is out of danger of becoming extinct in its natural environments.

Although it may be in trouble in the near future, because some populations are very small and unstable and the trend is that the general population is decreasing due to the loss of habitat, since some areas of the Amazon suffer great deforestation. These factors decrease the probability of survival for the ocelot, which cannot hide in dense forests or find food.

The ocelot was a sacred animal in ancient times by many cultures, but during the 60s humans began to be interested in its soft fur and beautiful pattern. During 1960 – 1970 they were extensively hunted and up to 200,000 hides were traded annually, which were sold for around 40,000 pains in the United States. The hunt for ocelots for their skins ended in the 1980s.

They were also hunted to be sold as exotic pets. The sale of ocelots as pets ceased when they were introduced as endangered animals.

In order to recover its population, protocols are initiated for its protection and currently its population has increased and is out of danger, but some populations are being affected by deforestation and the growth of settlements.

The ocelot has sometimes been used as pets throughout history. The most famous keeper was the abstract artist Salvador Dalí, known for traveling with his domesticated ocelot.

It is also thought that it was worshiped as by ancient Peruvian cultures (simulating the Egyptians with cats) who represented the ocelot in works of art.