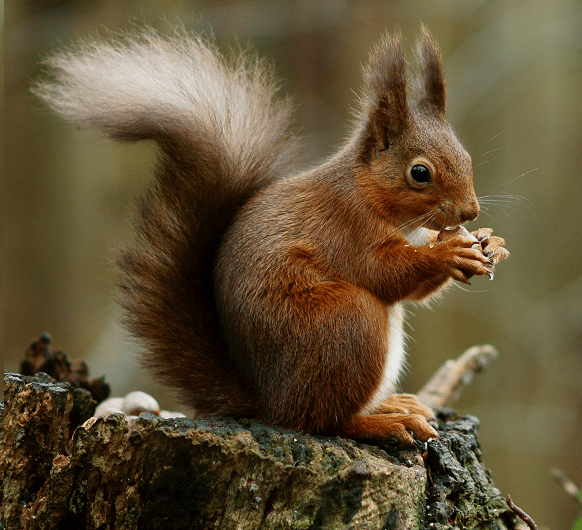 The common squirrel or red squirrel (Sciurus vulgaris) is a species of rodent mammal of the Sciuridae family and the genus Sciurus.

It is one of the most widespread squirrels in the forests of Europe. Although in the countries of Great Britain, Italy and Ireland, numbers have dropped dramatically in recent years, a decline associated with the introduction of the eastern gray squirrel (Sciurus carolinensis) from North America, although habitat loss is also a factor.

The species was first described by Carlos Linnaeus in 1758.

The color of the squirrel varies in color depending on where it is and the time of year. Red fur is most common in Britain. It sheds its fur twice a year: In winter the fur is lighter, thicker and has tufts of hair on the ears (this is something that characterizes this species), while in summer it is shorter and darker.

The common squirrel, like other tree squirrels, has curved and sharp claws which help it to raise or lower logs. Its powerful hind legs allow it to jump between branches. They can swim.

Its diet is omnivorous. It feeds mainly on tree seeds, carefully peeling coniferous cones to access the seed inside. They supplement their diet with mushrooms, nuts (hazelnuts, beech and chestnut), berries, young shoots, bird eggs and insects. From time to time remove the bark from the trees to get to the sap.

When they have excess food, they hide it to eat when their food sources are scarce. They have memory, but do not remember exactly where they hid it, resulting in sometimes not being found.

During mating, males detect oestrus females by an odor they produce, and although there is no courtship, the male chases the female for up to an hour before mating. Usually several males chase a single female until the dominant male, usually the largest of the group, mates with the female.

Mating occurs in late winter in February and March, and in summer, between June and July. Up to two litters are possible per year per female. Each litter usually contains three or four young, although up to six can be born. Gestation lasts 38-39 days.

They are born helpless, deaf, blind, weighing 10-15 g; hair covers their skin at 21 days. The eyes and ears open at 3-4 weeks. They develop their teeth at 42 days. They begin to eat solid at 40 days and weaning at 8-10 weeks. The young are kept solely by the mother.

They live for approximately 3 years in the wild, but can reach 7 years of age and in captivity up to 10.

Survival is positively linked to the availability of seeds in autumn-winter. 75-85% of the young die during their first winter, and mortality is approximately 50% for subsequent winters.

It is a twilight species, being most active during dawn and dusk. They often rest in the day, avoiding the heat and high visibility to the birds of prey that are dangers during these hours. They live in tree holes or made by birds. In some cases, they have a kind of nest, forming a dome-shaped structure 25 to 30 cm in diameter, made of twigs, moss, bark and grass.

During the winter they do not overwinter.

They are prey for small mammals such as domestic cats, stoats, martens; birds of prey such as owls, goshawks and buzzards; Some animals such as dogs, foxes and felines can prey on the squirrel when it is on the ground.

It is distributed throughout Eurasia. They occupy the boreal coniferous forests, preferring the Scots pines, spruce and Siberian pine. In western and southern Europe they are found in broadleaf forests, where the mixture of arboreal and shrub species provides a year-round food source.

The common squirrel is classified on the IUCN red list in the category of Least Concern.

The species is numbered in Appendix III of the Berne Convention. Threatened in the UK, and is protected under tabs 5 and 6 of the Wildlife and Countryside Act.

Its population has declined due to the loss of its natural habitat, disease and, in particular, competition with the introduced American gray squirrel (Sciurus carolinensis).