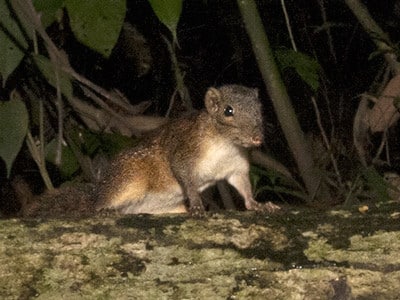 The shrew-faced ground squirrel is a forest floor inhabitant of undisturbed primary and mature secondary forests: it is reserved in habit and rarely seen. It is medium in size, feeds mainly on insects from the forest floor and probably nests in hollow logs.

It appears to be strongly twilight in habits, that is, it is most active in the early morning and late afternoon.

Although it is a true squirrel of the Sciuridae family, this species superficially resembles the common tree Tupaia glis (family: Tupaiidae) in appearance. In both species, the snout is long and pointed, but the opening of the shrew-faced ground squirrel is much shorter compared to the common tree.

Additionally, the shrew-faced ground squirrel’s tail is characteristically short and bushy, unlike that of the Common Treeshrew, which is almost twice as long.

The shrew-faced ground squirrel’s coat is dark brown on top and pale white to white underneath. The upper incisors are greatly shortened compared to other squirrel species, and the tongue is very long – they are adaptations to its insectivorous diet comprising ants, termites, earthworms, and beetles.

species is found in southern Thailand, Peninsular Malaysia, Sumatra, and parts of Borneo. In Singapore it is considered rare.