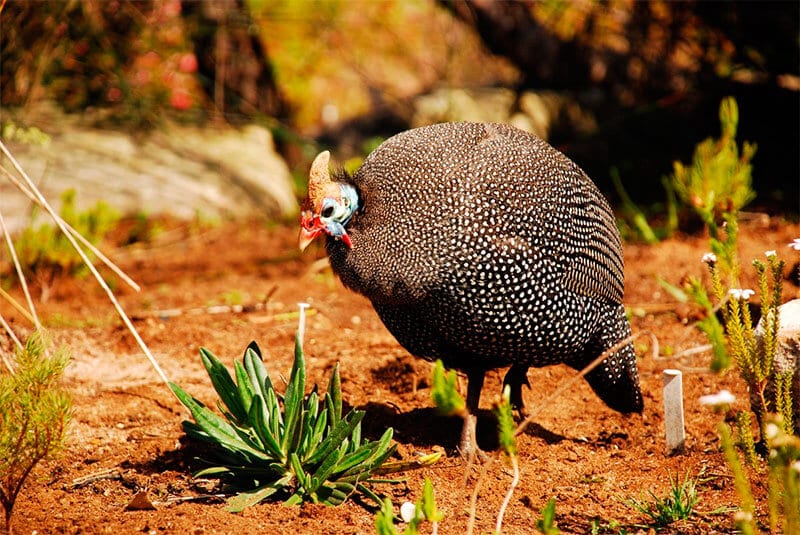 The Guinea fowl (Numida meleagris) also called: common graffiti or painted gray. In some countries it is known as: coquena, kokena or cocóna. It is native to the African continent but can be found in other countries as it is a species bred in captivity by humans.

The guinea fowl has 9 recognized subspecies.

The guinea fowl is a very peculiar bird, as it has long dark colored feathers and has a bald neck and head. It measures between 53 – 58 cm in height, with a rounded body and a small head. They weigh about 1.3 kg on average. They can live for about 12 years in the wild and several more in captivity. The subspecies have variations in their appearance in the shape, size and color of their hooves and facial beards.

They have short, rounded wings, and the tail is equally short. They are equipped with strong claws where they scratch the ground to find food, much like domestic chickens, although they rarely uproot plants.

The plumage is a mixture of gray-black color with a white splashing. The bony pommel is dull yellow or reddish in color, and the bare skin can be red, blue, or black.

Outside the nesting season, it forms flocks of about 25 birds. They are considered land birds, such as ostriches, as they prefer to run to fly when they are in danger. Although like most gallinaceous birds, they have a short explosive flight and depend on great heights and gliding to travel great distances.

They are great runners, reaching 10 km or more in one day. They make loud, harsh calls when someone bothers them.

The males are aggressive towards each other and participate in fights that can injure and leave the opponent bloodied. In the process they will try to look as fearsome as possible by raising their wings up from the sides and ruffling their body feathers. They can also run towards their opponent with their beaks open, very similar to roosters.

The guinea fowl is a very adaptable bird, so it is found in many habitats. They inhabit jungles, forests, bushes, grasslands and even desert areas.

It is a native bird of Central Africa that has spread throughout the continent, including Madagascar. With the arrival of Europeans in Africa they have reached other parts of the world as captive birds.

The guinea fowl is an omnivorous bird that has a diet of both plants and other animals. They consume earthworms and insects from the soil, along with seeds, berries, and small mammals and reptiles.

The guinea fowl has predators everywhere, with respect to mammals its predators are: wildcats, dogs, wolves and humans. And reptiles like: snakes and crocodiles.

The guinea fowl nests on the ground and builds a nest with branches and leaves in a hidden place to protect its young. also The female spawns between 8 – 15 small eggs that will hatch after a month of incubation. The young (known as keets among bird breeders) remain with their mother until they are developed enough to survive on their own.

They are also great for eliminating tick pests and spreading Lyme disease.

Although it originally only lived in Africa, it is currently being raised by humans in many parts of the world. Therefore, it is considered a species in “Lesser Protective Hazard”.

In Africa it has been used by humans as domestic animals for thousands of years, due to its large size that can provide a large amount of food. Today they are used all over the world for meat, eggs and feathers.