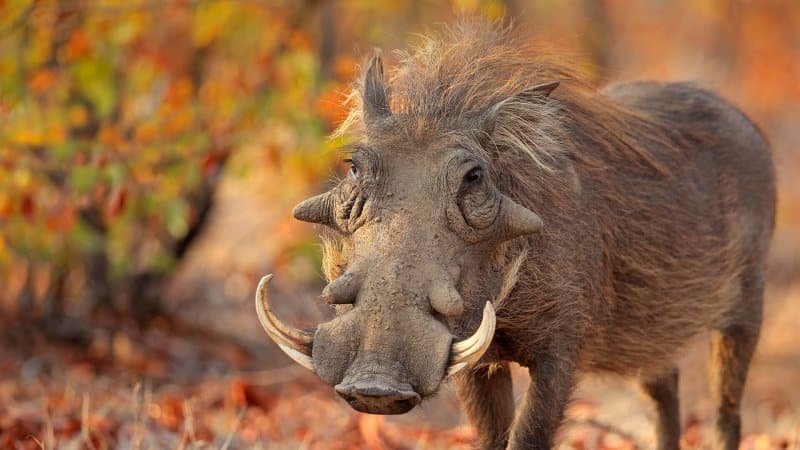 The Common warthog (Phacochoerus aethiopicus), is a mammal member of the pig family, Suidae (order Artiodactyla), found in open and lightly wooded areas of Africa. The warthog is an animal with scant hair, large head, blackish or brown that is located about 76 centimeters from the shoulder. It has a thick mane that extends from the neck to the middle of the back, and it has a long, thin, tufted tail that it carries high as it runs.

and It is a gregarious animal that feeds on grass and other vegetation. It often takes refuge in anteater burrows, which it enters from behind to defend itself.

The male has two pairs of bumps or warts on his face. Both sexes have fangs; those of the lower jaw form sharp arms, and those of the upper jaw curve upward and inward in a semicircle, reaching a length of more than 60 cm in some males.

The warthog is a tough and tough animal. Males weigh 9 to 20 kilograms more than females, but both are distinguished by their disproportionately large heads and the protective “wart” pads that appear on either side of the head. The large tusks of the wild boar are unusual: the two upper tusks emerge from the sides of the snout to form a semicircle; the lower fangs, at the base of the upper part, are worn down to a sharp edge.

also The sparse bristles cover the boar’s body, and the longer bristles form a mane from the top of the head to the middle of the back. The long tail ends with a tuft of bristles.

Although they can burrow, they typically use holes dug by other animals, such as anteaters. They sleep and rest in holes. The refuge holes are important for the thermoregulation of the warthog; Without skin or fat, the warthog lacks both protection against the sun and insulation against the cold. Sometimes they fill the holes with grass to warm themselves.

The common warthog lives in the grasslands and savanna forests of Africa. They prefer open areas, and are found on Mount Kilimanjaro at an elevation of 3,000 meters. Desert warthogs are found in eastern Africa, in parts of Kenya, Somalia, and Ethiopia.

They live in burrows made by anteaters. But they don’t fight over the holes. They are generally passive and seek out already abandoned burrows to make their homes.

The common warthog take feeding very seriously. They have developed an interesting practice of kneeling on their callused, hairy, padded knees to eat short grass. It also uses its snout and tusks to dig for bulbs, tubers, and roots during the dry season. They are often perceived as vicious animals that attack and eat prey, although they are not. During the wet season, they can eat earthworms and other small invertebrates. In times of scarcity, they can eat meat, but they do not hunt. They eat dead animals, worms, or insects that they encounter while feeding.

In a dry season, these animals can go months without water.

The predominant predators of these animals are lions. They avoid nocturnal predators by being active during the day and by hiding in burrows at night. also They are fast runners and generally avoid attack by fleeing. They change their activity patterns to avoid humans. In areas with human disturbances they often become more active at night.

Male warthogs prefer the single lifestyle, joining females to mate. They live in family groups made up of a female and her young. Sometimes two families, often of related women, come together. Males normally live alone, only joining these groups to mate.

Before giving birth to a new litter, the female chases away the litter she has been raising and isolates herself. These abandoned youngsters may mate with another solitary female for a short period of time before going out on their own. The female suckles the new litter, and each piglet has its own nipple, suckling exclusively from it. Even if one piglet dies, the others do not suckle from the available nipple. As such, litter size is generally limited to four young because females only have four nipples.

Included in the list of Least Concern (LC), as the species is relatively widespread, abundant, and no major threats are believed to result in significant population declines.

Without a doubt, the most common warthog in history is Pumbaa, the companion and friend of Timon (Meerkat), Simba (Lion), and Rafiki (Baboon) in the Lion King. He appears in all the films of the saga and is characterized by his kind and friendly personality.