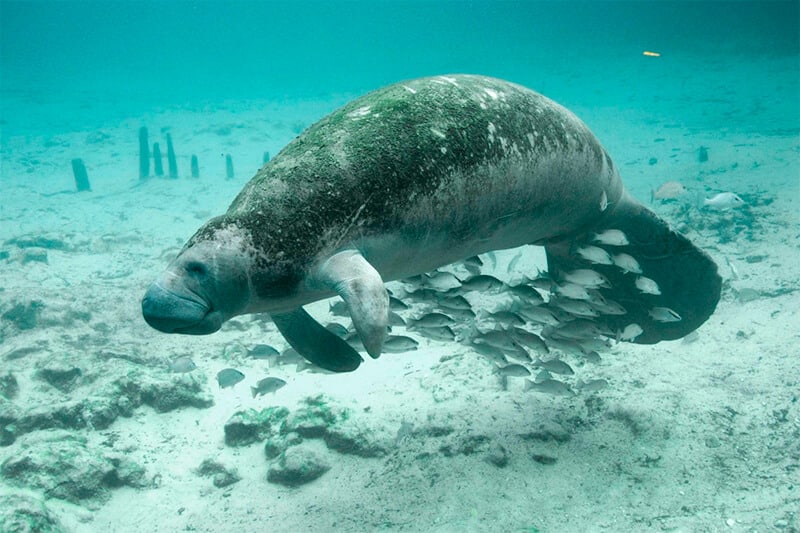 The sea ​​cow, is a large mammal that lives in temperate waters of the eastern hemisphere of subtropical areas such as Florida or the Caribbean. It is also known as a sea cow, as the only marine mammal that is strictly herbivorous. 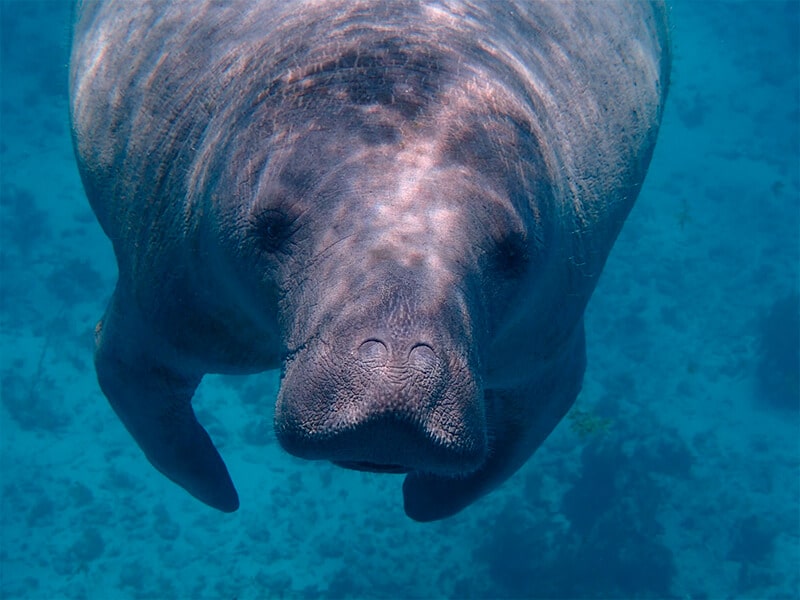 It belongs to the family of Trichechidae of the genre Trichechus with three living species:

The manatee can weigh up to 590 kg and measure 4 m in length. It can live more than 70 years. They present sexual dimorphism, since the female manatee is much larger than the male, and therefore heavier than the male, managing to be one of the largest mammals in the sea but it is too far from the weight and size of the king of the sea, the whales blue

The upper lip is large, flexible and prehensile that is used for feeding, social interaction and communication. Compared to their mermaid companions (dudongs) they have shorter snouts. The eyelids are closed in a circular manner. and The tail is paddle-shaped, being the main visible difference between a manatee and a dudong. The tail of the dudong is similar to that of a whale.

Adults do not have incisor or canine teeth, only a group of teeth on the cheek that will not be more than six teeth in each jaw. They are not clearly differentiated into molars and premolars. Teeth are repeatedly replaced throughout their lives, new teeth grow in the back as old teeth fall out from the front of the mouth, much like elephant teeth.

Like other mammals, they have two teats, one under each fin, they also do not have gills, so they cannot breathe underwater and must come to the surface to take a breath regularly. These were the first characteristics that were used to establish the first links between the manatee and the elephant. Despite belonging to mammals it is quite different since it only has six cervical vertebrae, while the rest of mammals have seven.

The stomach of the manatee is quite simple, like that of the horse, in return it has a large cecum in which it digests the toughest vegetables. The intestines are about 45 m, exceptionally long for an animal of its size.

The manatee can be seen in large herds, consisting of about 20 individuals but it is generally a solitary animal and they tend to spend most of their time alone, except for the female manatee that must be with her calf to raise it.

Most of the time is spent sleeping or eating plants in warm, shallow waters of a couple of meters.

You consume about the equivalent of 10-15% of your body weight per day (about 50 kg per day). In order to digest such amounts, it uses the fermentation of the intestine to carry out the digestion process.

Generally, the manatee does not have any type of natural predator that threatens its survival but it is believed that sharks, jaguars and alligators exist but there is no evidence of this and there is no documentation.

However, humans are the main cause of the current low manatee population. They are hunted for their fat and meat.

The manatee generally reproduces only once every two years and only a single calf is born, with twins being very rare. Males reach sexual maturity between 9 – 10 years and females at 3 years.

The mating process occurs in the water with different postures. The female will be surrounded by several males for weeks that will compete with each other to determine who will be the first to mate. In general, the female tries to achieve from them but it is usually in vain. Finally, the female will mate with several males, without becoming a stable couple.

Gestation lasts for about 12 months. At birth they weigh approximately 30 kg and will spend between 12 and 18 months with the mother.

The manatee is endangered by Appendix I of CITES (Convention on International Trade in Endangered Species of Wild Fauna and Flora) which prohibits trade from manatees. The West Indian manatee species (Trichechus manatus manatus) is considered endangered by the IUCN (International Union for Conservation of Nature).

At the international level, all species belonging to the order of the sirenia are protected by the Cartagena organization (SPAW), which prohibits any product created from manatees.

The manatee has been linked to mermaids (hence the name of their order) in ancient folklore. In West Africa manatees were believed to be sacred animals, so if you killed a manatee you were considered a sinner. In South America they were hunted very often for their meat and their bones were used to treat basic diseases.