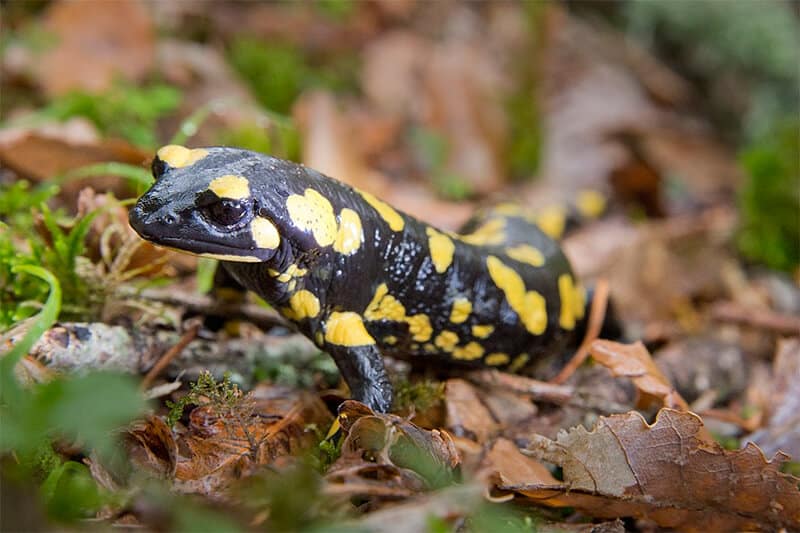 The salamander is the common name of the caudates (Caudata). They are amphibians with a long, thin body that keep their tail throughout their lives.

Its appearance is very similar to that of lizards (it is quickly differentiated by the absence of scales) but in reality they are more rationalized with the amphibian lizard, the newt.

There are more than 695 living species of salamanders of different sizes and appearances. The smallest salamander is the newt and the largest is the Chinese giant salamander (Andrias davidianus) that can reach 2 meters in length.

The body is elongated, provided with pairs of short legs of the same length, although in some species they are very small or lack them. Their skulls are wide and flat with prietal bones attached and provided with curved teeth. The pelvic girdle is cartilaginous, lacking a dermal shoulder girdle. The larvae are very similar to the adults, possessing teeth in both jaws. Unlike frogs, they lack a middle ear.

The skin secretes mucus to keep the animal moist when on land and regulates salt when in water. It also provides you with a necessary lubricant for swimming.

They also have the ability to secrete poisons through the glands in their skin.

The vast majority of species are brightly colored, especially males during the breeding season, which turn their skin a brighter and more intense color to attract the attention of females. The species that live underground have a white or pink color because they are not exposed to the sun’s rays.

Salamanders live in temperate climates. Most salamander species are aquatic or semi-aquatic animals as they have permeable skin.

It is possible to find it in aquatic regions, wetlands or forests.

Salamanders are distributed in all the continents of the northern hemisphere with the exception of some species that are found in northern South America. One third of the species inhabit North America, with the majority concentrated in the Appalachian Mountains.

Salamanders are carnivorous animals that feed mainly on small fish and insects.

The salamander is known for your ability to regenerate your lost limbs (similar to that used by newts and largaros) and in some species they are capable of recovering certain parts of their body.

This feature allows it to escape predators by allowing it to shed body parts when hunted.

Among its natural predators we find: fish, snakes and birds.

Salamander populations have decreased dramatically due to the high levels of fungi present in the water. It is unknown if this is the main cause of the decrease in salamander populations, although it is also thought that pollution levels have also played an important role.