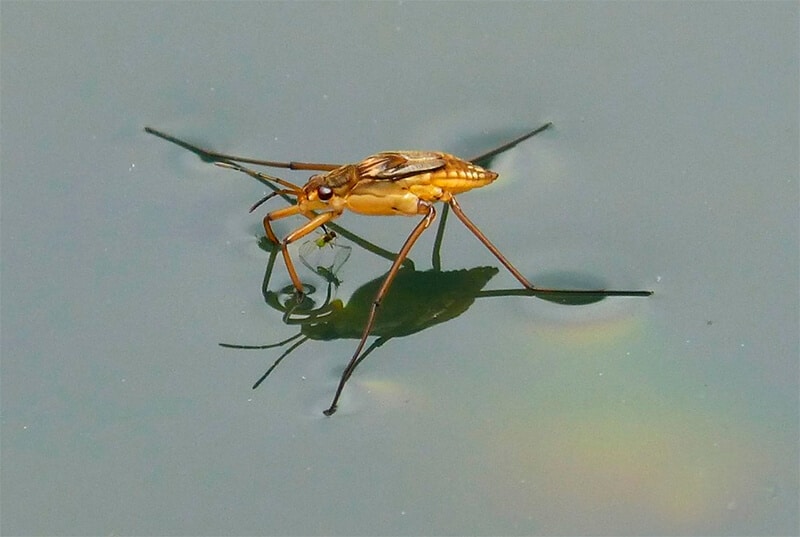 The Shoemaker is the common name of the insects belonging to the family Gerridae, called differently according to each country. It is an aquatic insect that is found in the immobile waters of the northern hemisphere. There are more than 1,700 different species of shoemakers and 10% are marine species. Like most insects they are very delicate and are known to have the ability to “walk on water.”

The family Gerridae It is characterized by its water-repellent hair, retractable preapical claws, and elongated legs and body. Hydrophic hairs are microhairs that make up a small hair (1,000 microhairs for each hair) that provides resistance to water, whether they are splashes or drops of water. As the water does not remain in the body, it prevents it from weighing more than necessary and weighing on the body.

He is known for his ability to “walk on water.” To achieve this, they use surface tension to walk on the surface of the water. They detect the vibrations and ripples of the water with the sensitive hairs that they have on their legs and bodies. Not only can they walk on water, they are also able to detect the exact spot where another insect falls into the water. Once detecting it, it will run towards it to hunt it down.

The shoe rack is small in size, with legs and an elongated body. In most species it varies between 2 – 12 mm. The largest species inhabit the northern hemisphere, which vary between 12 – 25 mm. Females are larger than males in almost all species except for the species Gigantometra gigas, which lives in northern Vietnam and southern China, where the size is reversed. In this species wingless males reach 36 mm and 32 mm in winged females (winged males are simply slightly larger than females). In this species, each middle and rear leg can exceed 10 cm.

It has two antennas divided into four segments. Numbered from closest to the head to furthest. The antennae have short, stiff bristles on the third segment. The antennae segments vary in length between different species, which helps to identify the different species within the family. Gerridae. In general, the first segment is the longest of the remaining three. The four segments combined do not measure more than the head of the shoemaker.

The thorax is the longest, narrowest and smallest. also The outer layer of the thorax can be shiny or opaque, although it depends on the species. It can be covered with micro-hairs to repel water. and The abdomen can have several segments and contains both methane and omphalium.

info about the legs

The legs are made up of a pair of front, middle and back legs. The front ones are located just behind the eyes, they are shorter and have preacpical claws adapted to pierce the prey. They are not found at the end of the leg, but in the middle. The central legs are located in the central part of the thorax, very close to the hind legs and are longer than the first pair, but shorter than the last pair and are adapted to propel themselves through water. By moving them quickly they can flee from a predator or to hunt another insect. The hind legs are the longest and are used to distribute the weight and guide the shoemaker over the surface.

Some shoemakers have wings on the dorsal thorax, although not all species have them like the Halobates. Throughout evolution, it has experienced a polymorphism in the length of which has affected its flight capacity and has evolved in a phylogenetic way where some populations have long, winged-dimorphic or short-winged wings. Shoemakers’ wings change according to the habitats where they live. In the bravest waters they have shorter wings and calmer waters the wings are longer. This is due to the potential damage of the las and the capacity of dispersal.

Kinship discrimination is rare in the family Gerridae, and it is only really observed in the genus Halobates. Numerous studies have shown that without hunger, that Aquarius remigis nor the Limnoporus dissortis they preferentially cannibalize non-relatives. These species show no family inclinations, leaving their young to feed without assistance. The females are the ones that cannibalize the most, and they also do it on the young, therefore they must be dispersed as soon as their wings are flayed to avoid cannibalism and other social problems. Neither parents nor siblings are able to identify themselves among genetically related members.

They are territorial insects and they let others know through vibrations. Both males and females have their own territories. During the mating season the male will protect the female and her territory. Outside of the reproductive stage, they sometimes live in groups to work together for more food and shelter. If the group becomes too dense they will hinder by flying or initiating cannibalism.

They do not spend all their time in the water, when winter arrives they must hibernate to resurface when spring arrives.

When the concentration of salt in the water suddenly increases, it can trigger the migration of shoemakers. When it occurs they will move to other areas of less salinity, which will result in the mixing of genes within fresh and brackish water bodies.

Another reason that can disperse shoemakers is the density of the nymph population (young). Therefore, it will result in a higher percentage of upper arm adults developing flight muscles. In this way they can fly to other neighboring areas, mate and thus spread their genes. This spread and mixing of genes is beneficial for the species.

Normally, they are dispersed in a way that decreases the density of shoemakers in a certain area. Most species do it through flight. Species that lack wings depend on the flow of water or floods. In the Halobates, the eggs are often deposited on floating debris and thus cause them to spread across the ocean.

The cobbler inhabits the surface of ponds, slow streams, swamps, and other calm waters. Most of them do so in areas of sweet algae, but there are genera such as Asclepios, Halobates, Stenobates that inhabit marine water. Normally, they reside in coastal areas, although some Halabates live offshore, being the only insects in that habitat.

It can be easily found throughout Europe, Russia, Canada, the USA, South Africa, South America, Australia, China and Malaysia. At the moment no species has been found in New Zealand.

The cobbler is a carnivorous insect that feeds on other invertebrate insects, mainly spiders and insects or on the larvae of other insects. Despite its personable appearance, it is actually quite aggressive as a predator. When an insect falls into the water, it generates waves in an attempt to get out of the water that are detected by the front legs of the shoemaker. Going towards it, it injects salivary enzymes that break down the internal structures of the prey, and then sucks the resulting liquid. They prefer live prey, although they feed indiscriminately on terrestrial insects.

In the genus halobatos, which are found in the open sea, they feed on floating insects, zooplankton and sometimes resort to cannibalism, eating their own young. This indirectly helps to control the size of populations and to reduce territorial conflicts. When they are not in mating season and form cooperative groups, and cannibalism rates are not low, shoemakers will share large kills with others around them.

Some species of shoemakers are gathering insects that feed on sediment or the surface of deposits.

The shoe rack for its size and its prominent appearance, immobile on the surface of the water, is easily recognizable by other aquatic animals. The main predators are fish and newts from the water and birds, frogs and toads from the surface.

Petrels, terns and other marine fish feed on the halobates. Fish do not usually feed on cobblers, but will do so in case of a shortage. One of the reasons is that glands located in the thorax of shoemakers secrete an aroma that repels the fish from eating them.

The frogs feed on them. But like fish, they will do so when food is scarce. The biggest predators are birds. Sometimes, it is the shoemakers themselves who become predators, since cannibalism is practiced in some species.

To escape predators they can fly to other ponds or dive underwater.

The shoemaker reproduces on the surface of the water. Mating begins in spring and early summer. Mating is done through the communication of the ripple frequency produced by the water surface. Males perform these ripples by emitting them at three main frequencies: 25 Hz as a repellency signal, 10 Hz as a threat signal, and 3 Hz as a courtship signal. It will first emit the repellency signal so that the other knows that it is in its territory. If he does not receive a repellency response, he understands that he is a female and will switch to the courtship signal. and If the female is receptive she will lower her abdomen and allow mating. If it is not receptive, it will emit a repulsion signal. Males that have mated will remain attached to the female throughout the reproductive season to ensure that they do not mate with other males and thus spread their genes. 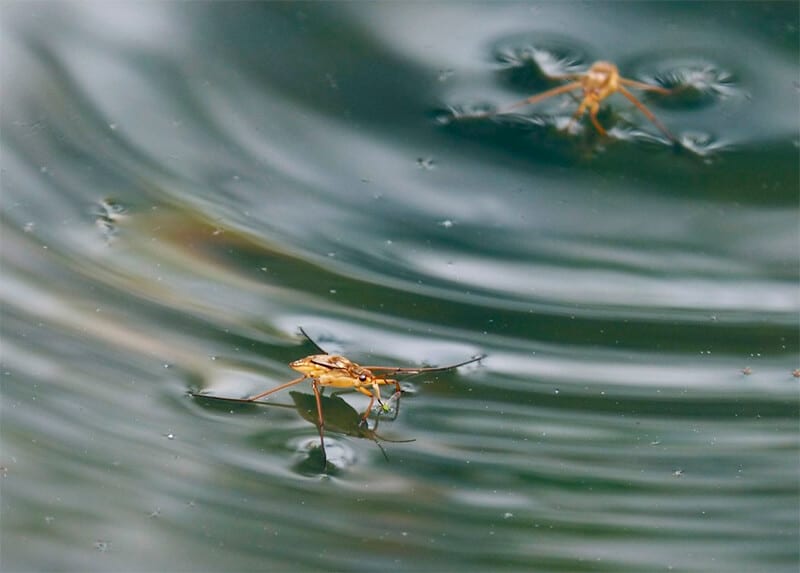 They lay their eggs on rocks or submerged vegetation using a gelatinous substance. Certain species lay their eggs at the water’s edge if the water is calm enough. The number of eggs spawned depends on the amount of food that is available. The females carry between two and twenty eggs. also The eggs are creamy white or translucent, but turn bright orange.

and The eggs will go through five stages from nymphal stages to adulthood. Each stage of the stadium has the same duration. Each nymphal stage lasts for 7-10 days and in the water it molts its old cuticle through a dorsal Y-shaped suture to the head and thorax. Nymphs are very similar to adults, both in behavior and diet, but they are smaller (1 mm in length), paler, and lack differentiation into the tarsal and genital segments.

When they hatch, the larvae dive into the water where they will develop until they emerge to the surface as adult shoemakers. This process can last between 60 – 70 days, although it can vary according to the temperature at which the water is.

Although the shoemaker is very numerous, they have problems maintaining their population. In areas where the crop is beginning to become scarce, they are being affected by the increasing levels of contamination of the natural sources of fresh water where they live.