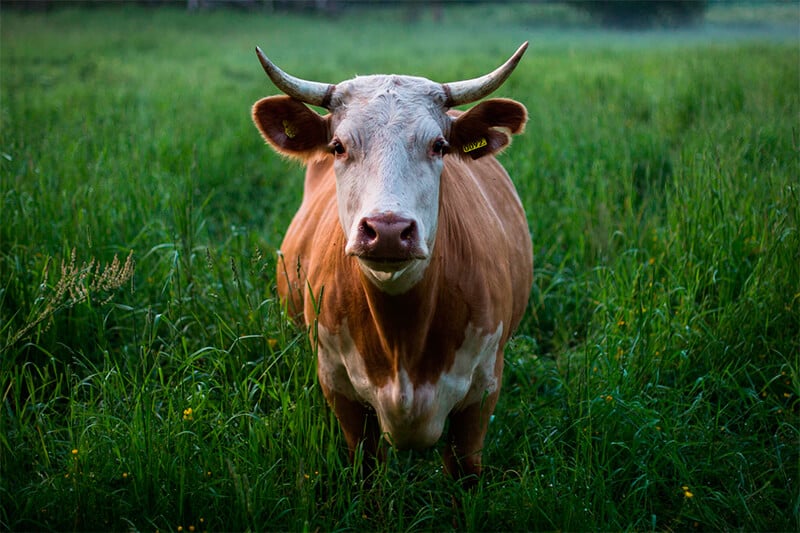 The cow (Bos primigenius taurus) It is raised in many different countries around the world, to obtain natural resources such as milk, meat and leather. In India, the cow is considered a sacred animal. It was domesticated in Asia 7,000 years ago from the aurochs, a large bovine animal native to Africa and Eurasia with large horns and thick fur.

It is estimated that there are about 1.5 million cows in the world, and most of them are raised by farmers although it is also possible that red cows remain in the wild.

Cow seen from the front

Cows are large, hoofed-limbed mammals. The size of their horns can vary between species, but there are no hornless cows as they are extinct due to careful genetic selection. They spend the day in herds of 40 – 50 cows, grazing in grasslands and shrubs.

The weight of the cattle varies according to the type of species. and The smallest adult Dexter and Jersey species weigh between 270 – 450 kg. also The largest species such as Charolais, Marchigiana, Belgian Blue and Chianina, can weigh between 635 – 1,150 kg. Bulls of all species are slightly larger than cows by a few hundred kg more.

The head of the cow is large and each side of its head has two hollow horns. The neck is short and broad, and they have a double chin hanging below the chest. Bought from other bovine animals, the cow has a fairly long tail ending with a long tuft of hair. The back is straight with the loin slightly arched. Females have a large udder under the belly in the rear quarter with four nipples from which milk is obtained.

The body is covered, in its entirety, by short hairs that vary from white to black through various shades of red and brown. Some cows have varied motifs or patterns and some species have a single color with extensive patches of another color.

It is estimated that 18% of greenhouse gases released into the atmosphere comes from livestock. Cows release methane through belching and flatulence.

In the cow, vision is the dominant sense with 50% information captured. To aid in the detection of its predators, it has its eyes located on both sides of its head allowing the cow to have a 330º field of vision, but this limits binocular vision from 30º to 40º compared to the human 140º, which it means that behind them they have a blind spot. His visual acuity is quite good but if we compare it with the human it is quite poor.

Humans often believe that cows and bulls (male cows) are insulted by the color red but it is totally uncertain as cows are color blind. This is believed due to the bullfights where they use a red flag to incite him to fight, but what does it is not the color, but the waving of the flag itself.

The cow has a well developed taste and they are able to distinguish four flavors (sweet, salty, bitter and sour) by using 20,000 taste buds. They avoid the bitter taste because they can be potentially toxic and prefer sweet and salty foods.

Plants are low in sodium, but cows have learned to seek salt through taste and smell. When it is lacking in it, it uses its olfactory and taste receptors to detect any food that contains the slightest amount of sodium.

Their hearing is sharper than that of horses. With an acuity threshold of 30º they are worse at detecting sounds compared to goats (18º), dogs (8º) and humans (0.8º). It is believed that since your vision covers the entire horizon, your hearing is not necessary to fix your gaze towards a sound source.

The cow’s lows are a means of communicating with the rest of the cattle and can provide information such as age, sex, reproductive status … Calves can locate their mother and bulls use it to indicate heat and competitive exhibition .

Cows are ruminant animals, therefore, their digestive system is specialized in digesting all kinds of plants. Cows are believed to have four stomachs, but actually only have one, but divided into four separate compartments known as the rumen, reticulum, omasum, and abomasum, with the rumen being the largest compartment. The reticulum is the smallest compartment known as the “honeycomb.” The omasum has the function of absorbing water and nutrients from digestible food. The abomasum is known as the “true stomach” because it is more similar to the human stomach.

Ruminants are known to regurgitate and re-chew their food. While the animal is eating, the food is swallowed without first being chewed and is stored in the rumen until the animal finds a quiet moment to digest. The rumen contains microbes responsible for the breakdown of cellulose and carbohydrates that cattle will use for energy. These microbes, when they die, provide valuable high-quality protein to livestock.

The posture of the ears of cows are indicators of general mood and well-being. The temperament is important since it can affect the quality of the meat, milk or the reproduction of the animal. When cattle are stressed, other animals are able to recognize it from the chemicals in their urine.

and When a cow is isolated in the short term, it can suffer severe psychological stress. When the cow must be kept isolated, mirrors are used to avoid stressing it.

The cow is a herbivorous animal that feeds mainly on grass, although it also consumes grasses, stems, leaves, seeds, and roots of numerous plants. They eat for most of the day, in total, about eight hours a day. 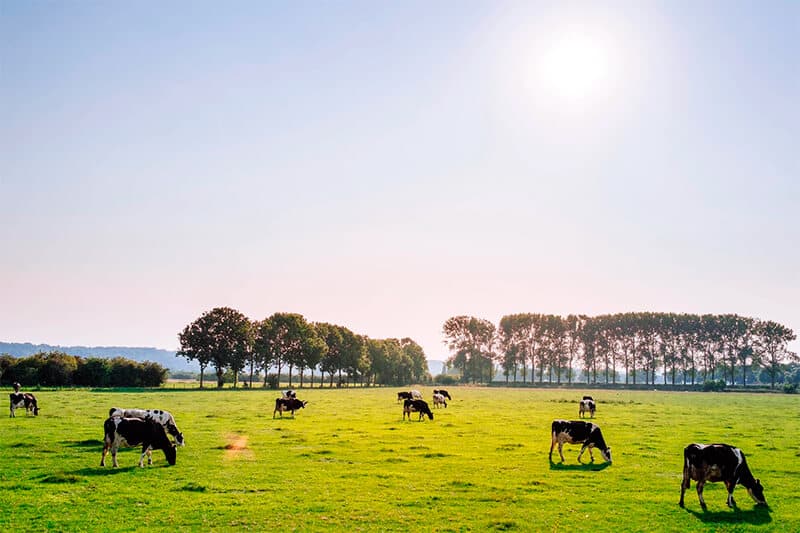 The main predator of the cow is the human being. But also other animals that attack livestock in North America are wolves and grizzly bears. In Asia, wolves and tigers kill and eat cows from time to time. In Africa, cows are sometimes eaten by lions and leopards. And in Australia, a type of wild dog called a dingo sometimes kills and eats cattle.

The cow has the possibility of interbreeding with other animals with other species close to it such as yaks and bison. These animals have been crossed with cows obtaining hybrids with success. However, it is impossible to cross the cow with buffalo.

It can reproduce throughout the year, although spring is the ideal time, since a greater number of calves are born. The gestation of a cow lasts about nine months and gives birth to a single calf weighing between 25 – 45 kg (varies according to the species) and will reach adult weight at two and a half years. During its growth it will be called a calf until it is two or three years old and later a bull.

Both the cow and the bull reach sexual maturity in their first year. The cow will be able to give birth up to 12 years of life. Currently, reproduction can be natural or by artificial insemination.

In general, the cow is not in danger and is classified as a minor concern, but it is true that some species of cows are in danger of extinction, such as the red cows that were mainly destined for agricultural work.

The cow since it was domesticated has been used by man to produce food such as milk and meat, and the production of leather for clothing. Other products derived from milk are also created.

The cow only produces milk after having calved and if they are milked regularly, providing the man with a product rich in calcium, phosphorus, magnesium, zinc, iodine, selenium and vitamins A, D and vitamin B12. It produces around 4,000 liters per year, but some can produce up to 10,000 liters.

On the European continent, during the 20th century, milk became extremely popular, becoming a regular consumer product in middle-class households. This increase means that farms must improve their processes to become more productive and thus improve milk hygiene. Although the milk would not have remained if it had not been for the great advance generated by the creation of the UHT conservation treatment popularly called Ultrapasteurization, a process that eliminates microorganisms from the milk that are harmful to humans.

Excessive consumption of milk caused some problems in humans as some may develop lactose intolerance. However, currently there are lactose-free milk for anyone to consume.

Milk can be transformed into various dairy products such as cheese, butter, heavy cream or yogurt. Behind all these products there is an important industry that produces milk, transforms it and distributes it all over the planet.

The cow is also raised to produce beef. There are breeds exclusively bred for the production of high quality meat such as the Hereford and the Charolesa. Their skin is also used to make coats and shoes. As with milk, there is also a great industry behind it.

A cow produces more than 50 liters of manure a day that is used as compost and fuel.

In the Hindu religion of India the cow is considered divine and satvik (with pure virtues) and is worshiped as a goddess. However, during the late period they were massacred and subsequently have acquired their current status. According to the Mahabharata these should be treated as well as a mother is treated. They appear in numerous stories in the Vedes and Puranas but they do not have dedicated temples. The Krishna goddess was raised by shepherds and was given the name Govinda (protector of cows). Also, Shiva is said to ride on the back of a bull named Nandi. The slaughter of cows (including buueyes, bulls and calves) is totally prohibited by the law of the Indian Union.

In the Chinese zodiac, the ox is one of the 12 animals in the calendar.