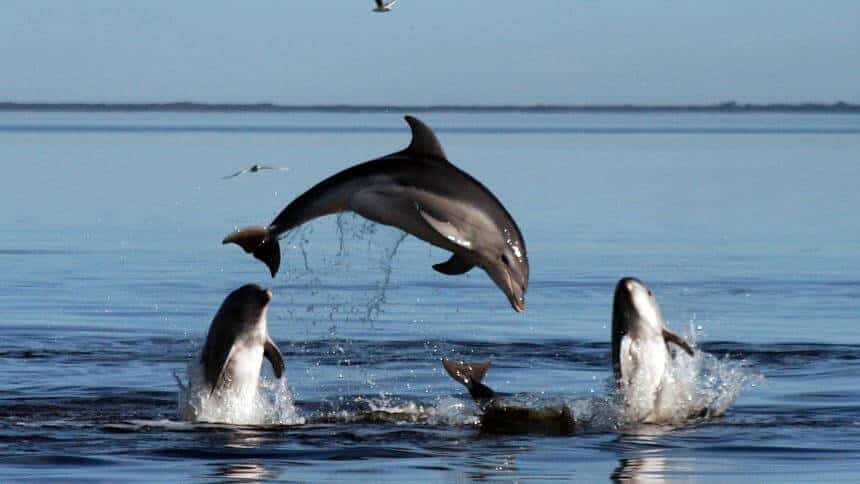 Although they are often mistaken for fish, they are actually vertebrate mammals. One way to tell the difference between a cetacean and a fish is by looking at their tails. You can tell if a cetacean has tail fins that are horizontal and move up and down. Fish have vertical tails that move from side to side.

Regardless of where they live, they have to reach the surface of the ocean to breathe at different time intervals. This cycle can last up to 30 minutes in some large species.

Dolphin skin color is gray-blue, but it can also be black, white, light gray, bluish, and even pink, or the combination of these colors varies by species. However, in all cases, your skin is very sensitive to impacts and other elements that may be in the water.

These animals are often thought of as one of the most intelligent animals in the world. They have bigger brains than humans. Studies show that they also have excellent hearing. They are able to hear frequencies that are at least 10 times higher than what the best adult hearing can deliver.

How many years does the dolphin live?

The dolphin can live between 20 and 45 years depending on its habitat, if they live in freedom, are healthy, etc.

Although dolphins are wild animals, they are well known for their agility and playful behavior, making them a favorite with wildlife watchers. Many species leap out of the water, spiral jump (rise vertically out of the water to see their surroundings), and follow boats, often synchronizing their movements with each other. Scientists believe that dolphins conserve energy by swimming alongside boats.

They live and travel in groups of 2 to 40 dolphins. They are diurnal animals and when they sleep they do it in a very special way. When they close one eye, the same hemisphere of their brain loses consciousness until it finishes resting, closes the other eye so that the other hemisphere rests. While one of the hemisteries sleeps, the other is in charge of monitoring respiration.

Dolphins live in social groups of five to several hundred. They use echolocation to find prey and often hunt together by circling a school of fish, catching them, and taking turns swimming through the school and catching fish. Dolphins also follow seabirds, other whales, and fishing boats to feed on the fish they scare or discard in good time.

Many researchers agree that they are extremely social creatures and actually seem to rely on this interaction as they hunt, mate, and defend themselves and their packs. Research has also shown that dolphin pods are as large as several hundred limbs.

Dolphins make a sound that travels rapidly through the water. This sound bounces off and the information reaches another dolphin, which naturally decodes it with its melon.

They have a vocabulary of danger sounds, food sounds, and search sounds, and they sometimes put these sounds together in a reasonably complex way.

Most dolphins are marine mammals, this means that they live in the sea. They can be found in oceans around the world. Dolphins typically cling to shallow areas of water found along shorelines and continental shelves. They like to live in warm, tropical waters like the Indian Ocean, but dolphins can be found even in the seas around Scotland.

There are also some species that live in rivers. River dolphins can be found in places like the Ganges River and the Amazon River.

The dolphin is a carnivore. They live on the fish, squid and crustaceans that they find in the sea. Using their echolocation skills, they usually work together on their pods to find fish. They catch large groups of fish and take turns hunting and eating as many as they can. Although they have teeth, dolphins generally swallow their food whole. On a typical day, a dolphin will eat up to 14 kilograms of food.

Although some species have up to 100 teeth, they do not use them for chewing. They use their teeth only to hold the fish and then swallow them. Large dolphins like the Orca can consume up to 200 kilograms of fish per day. Pods often work as a team to surround a school of fish and enclose them as much as possible. Afterward, they plow through half the stock of fish and eat all they need.

They even take turns so that the fish don’t scatter and everyone has a chance to get the food they need. This hunting technique is just one of many types of feeding strategies you can use to reduce your fish catch effort.

Since the wild dolphin catches and eats its food underwater, and research is expensive and often difficult to do, most of the data regarding its feeding habits has come from analyzing the contents of the stomachs of dead animals that have been collected. wash on the beach.

There are many telltale signs that the dolphin is related to terrestrial origins. The fact that they need to rise to the surface of the water to get air is the most dominant factor.

Dolphin can be a tasty diet for certain predators providing them with exceptionally high fat content. The meat of dolphins and other cetaceans provides great nutrition for lurking predators, although larger species or individuals lack them.

They are usually preyed upon by killer whales and sharks such as (bull shark, tiger shark or the great white shark). The risk is higher for the young, which are protected by the group.

Dolphins are viviparous animals, therefore, they give birth to their young and feed them with their mammary glands.

Throughout the year, although in some areas there is a peak in spring and autumn.

Between 9 and 17 months, depending on the species. At the time of giving birth, the female will distance herself from the pod, often approaching the surface of the water.

As soon as the calf is born, the mother must quickly bring it to the surface so that it can breathe for the first time. The calf will nurse for 11 months to 2 years, and once breastfeeding is finished it will remain with its mother until it is between 3 and 8 years old.

They have been interacting with the human being since we know their existence, if we talk about charismatic animals, the dolphin is probably on the podium. Hugely popular, significantly intelligent, and scientifically sophisticated, it is among the most beloved animals among the people.

These animals have captured the human imagination in a variety of ways. They are curious, form strong bonds within their group, and are known to help their peers and people in a variety of situations.

The dolphin in captivity

If you’ve seen a dolphin in real life, it was probably in captivity. Many zoos, aquariums, and water parks keep dolphins and train them to perform in shows.

Dolphins kept in captivity for this purpose are usually treated very well, and they seem to enjoy entertaining people. Many people who otherwise would never have seen a dolphin are able to get up close to them and learn more about them. This, in turn, could help raise awareness of these animals’ conservation efforts.

However, many people think that dolphins should not be kept in captivity, and argue that an intelligent animal would prefer life in the wild and should not be contained in a small area.

It is impossible for us to know what a dolphin is really thinking. Even though they seem to be enjoying the performance, we don’t know what effect being in captivity has on a dolphin. Is it okay to keep dolphins in captivity? Both parties have valid arguments and there is no true right or wrong answer.

Consequences of the human being to the dolphin

Some species of dolphins are endangered due to human behavior.

The biggest threat to the dolphin population is fishing. Fishing boat nets are very dangerous for fishing boats because they can accidentally get caught and drown. In some countries, they are even hunted illegally as a food source.

Human pollution is another great threat to dolphins. Waste and chemicals dumped into the ocean can make dolphins sick and reduce their ability to fight infection and disease.

First of all we have a television series, from 1964, and a movie from 1996 called Flipper, about two children who meet and make friends with a dolphin.

To continue we have a video game from 1992, called Ecco the Dolphin, game developed by Novotrade International for SEGA MegaDrive, or SEGA Genesis, depending on the country. Ecco the Dolphin is a 2D action adventure game.

Finally, we have a cartoon series from 1992, entitled Delfy and her friends, which narrated the life of a dolphin policeman.