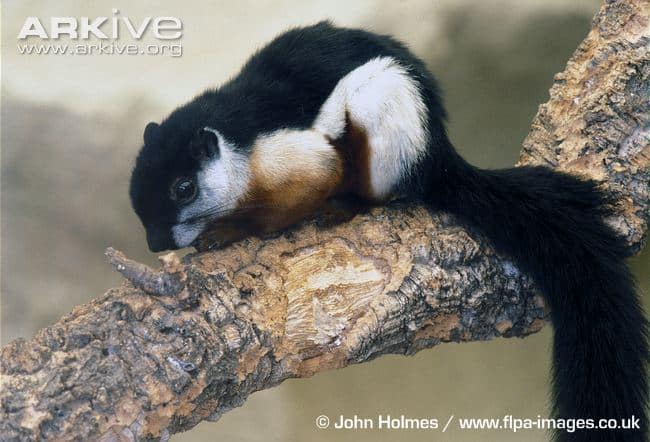 The giant black squirrel or Malay giant squirrel (Bicolor ratufa) is a species of sciuromorphic rodent of the Sciuridae family native to the Indomalaya region. It is distributed in the forests of northern Bangladesh, northeastern India, eastern Nepal and Bhutan, southern China, Myanmar, Laos, Thailand, Malaysia, Cambodia, Vietnam, and western Indonesia.

The length of the head and body ranges from 35 to 58 cm long, and the tail can measure up to 60 cm in length, with a total length of up to 118 cm. The upper part, ears and tail are dark brown to black with a beige belly.

The distribution of this species includes a variety of biological regions that all share the common character of being forested. It ranges at elevations up to at least 1,400 meters above sea level, in some of the most rugged terrain in the world. However, in recent decades, their habitat has been constantly invaded by human settlement, timber extraction and agriculture, which together with overhunting by human predation in parts of their area, has resulted in a total loss. of up to 30% of its population in the last ten years. However, in some places this species is protected from hunting by law or by tradition.

In South Asia it inhabits coniferous and broadleaf forests. In Southeast Asia it lives in evergreen, broadleaf, and semi-evergreen forests, but is rarely seen in coniferous forests. In the rainforests of the Malay Peninsula and Indonesia, it is not as abundant as elsewhere in its range, probably due to competition from other tree species (especially primates) that feed in the upper forest canopy.

Among the best places to spot this species is the Kaziranga National Park in the state of Assam, India.

It is a diurnal and arboreal species, but sometimes descends from the forest canopy to feed on the ground, rarely entering plantations and human settlements, preferring wild forests.

Its diet consists of seeds, pineapples, fruits and leaves It is mainly a solitary species, during reproduction the litter consists of 1-2 young.