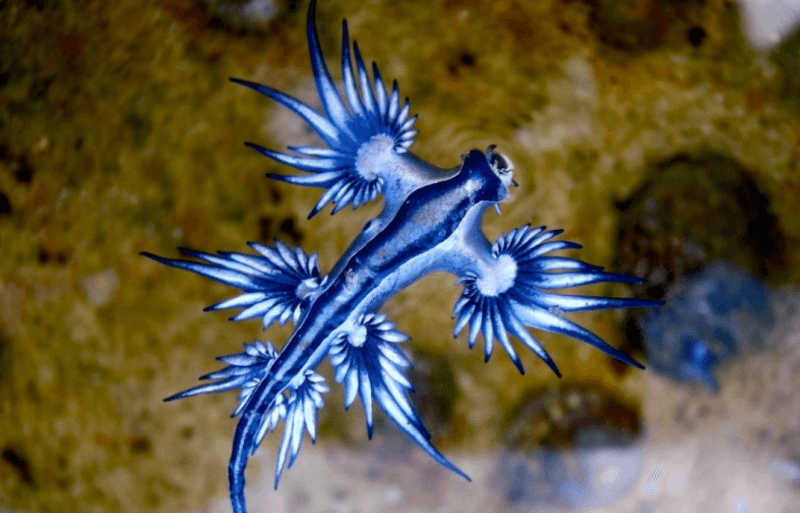 The sea ​​slug (Nudibranchia) or sea ​​slug, also known as sea ​​cucumber because of their shape and because they hide among the algae, thus looking like just another vegetable. It is a marine gastropod mollusk that, as an adult, lacks a shell and is usually bright in color. The sea slug, or nudibranch, is distributed throughout the world, the most numerous and the largest being those found in tropical waters.

They crawl along the seafloor or cling to submerged vegetation, usually in water just below the low tide line. Members of some species swim on the surface in the open ocean. Most are less than 2.5 cm long, although the largest, found in Australia’s Great Barrier Reef, reaches 30 cm.

Considered by many to be the most beautiful of marine animals, the sea slug is an invertebrate animal of a wide variety of solid colors and patterns. Many have feathery structures (ceratia) on their backs, often in a contrasting color. Most have two pairs of tentacles on their heads, used for tactile and chemosensory reception, with a small eye at the base of each tentacle.

Its scientific name, Nudibranchia, means bare gills, and describes the gills and feathery horns that most carry on their backs.

There are more than 2000 different species of the sea slug, and they are found throughout the world, almost one new species is found every day and it is estimated that there are many more species not yet discovered.

The sea slug has several defense mechanisms. Some have an unpleasant taste, others can camouflage themselves, and others can eat sea anemones and store their stinging cells on the wall of their body to protect themselves from predators.

Others, however, protect themselves by hugging their predators with their tentacles, thus reducing the mobility of the predator and preventing it from hurting them, although this ability is only available to the species of slug with tentacles.

protect itself from danger by wrapping its tentacles around potential predators, so that the predator is unable to harm them. However, this only applies to species of sea slugs that actually have tentacles, while others are completely defenseless.

The sea slug is a wild and solitary animal with a very docile behavior. It is a highly exposed animal and an easy prey for many sea animals.

They can be diurnal or nocturnal animals. This will depend on the species and the area where it lives.

It is an aquatic animal found in all the world’s oceans, but they are most abundant in shallow tropical waters.

The sea slug can feed on small sessile animals such as coelenterates, sponges, and bryozoans. Certain sea slugs that feed on corals and sea anemones ingest the stinging cells of their prey without discharging them; these pass from the digestive tract of the slug to the ceratia, where they are used by the slug for its own defense.

Although they are mainly herbivorous animals that feed on plankton, algae and decomposing material on the seabed. They are animals that help conserve the ecosystem where they live, since they do a good cleaning by eating the material and herbs from the rocks.

Mainly fish, crabs and lobsters. The human being is also considered a predator, who although they do not feed on it, they hunt them for their fish tanks.

Sea slugs are oviparous animals, like most snails and slugs, nudibranchs are hermaphrodites, allowing them to make the most of every mating encounter. Two slugs line up looking in opposite directions, then connect their penises to each other, giving and receiving sperm at the same time.

The number of threatened nudibranch species is unknown, as their global assessment has not yet been carried out. However, field observations over the years indicate that many species are becoming rare and harder to find due to water pollution, degradation or loss of suitable marine habitats, and the decline in biodiversity. Tropical species of sea slugs that feed primarily on tunicates (marine invertebrate animals) are greatly affected by the decline of the coral reefs where tunicates live.