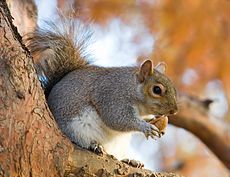 They mate twice a year. The gestation period is about 45 days and the young, three or four, are born during the months of February to March and August to September.

It is included in the list 100 of the World’s Most Harmful Invasive Alien Species of the International Union for Conservation of Nature.

It is an arboreal squirrel native to the eastern and midwestern United States and some southern parts of eastern Canada. Their specific name comes from the denomination of the states of South Carolina and North Carolina where they were first located and, even today, they are very common.

It has been introduced in other parts of the world (Mexico, Europe and South Africa) where it behaves as an invasive species. In Mexico, it is present in the north of the Baja California peninsula, where it was intentionally released. There is a registry in the northeast of the country (Tamaulipas). The current status of the species is not known in both locations.

In the case of Italy, the extension of the gray squirrel population threatens to displace the red squirrel, a native species with a similar ecology, and transmit pathogens that could kill it; this was the case in the UK.

It has recently been marketed as a pet in Spain, which represents a great risk of causing the same problem, since the release and escape of exotic pets are an important vector of entry of invasive alien species (IAS).

Due to its colonizing potential and constituting a serious threat to native species, habitats or ecosystems, this species has been included in the Spanish Catalog of Invasive Exotic Species, approved by Royal Decree 630/2013, of August 2, being prohibited in Spain its introduction into the natural environment, possession, transport, traffic and commerce.