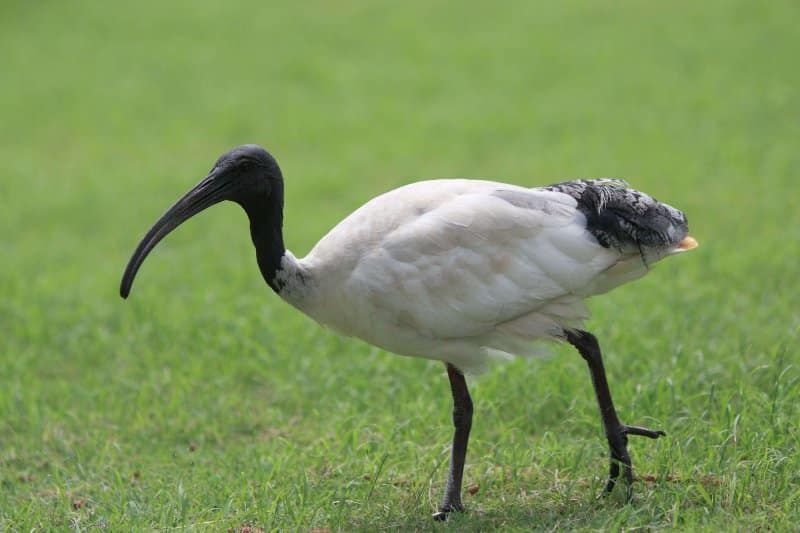 The Ibis (Threskiornithinae) , actually called tresquiornitinos, is a species of bird that is found near the coasts and swamps of all Africa and in all the warm and temperate regions to the south of the hemisphere. They are distinctively characterized by their large neck and long beak that helps them fish in the water.

The plumage of the tresquiornitino is mainly white with black feathers on the lower part of the back. Its small head and slender, curved neck are also black and practically bald. The ibis has small black eyes and a long, slender, downward-curving beak that is used to probe sand and mud in shallow water or in grass and soil when searching for food.

The legs of these birds are long and black and are partially webbed like most wading birds. When in flight, the wingtips of the primary flight feathers are black and show a black border on the back of the white wings.

The ibis is a gregarious bird that lives, breeds, and travels in large flocks. It is generally found in groups of 2 to 20 individuals, although they are known to occasionally group in larger groups of up to 300 birds.

When in flight, like most waders, they always fly in a ‘V’ formation, reducing wind resistance for the birds behind. When the front bird tires, it falls to the back of the formation and another ibis takes its place at the front.

The ibis is generally a silent bird, however it can sometimes growl or squawk while flying or in breeding areas. Other species of ibis, on the other hand, are more vocal, like their close relative, the Hadeda Ibis.

Nests in tree colonies and also on the ground in papyrus thickets or shrubs. They often nest with other wading birds such as herons. Their nests are generally messy platforms of sticks and generally built in baobab trees.

This bird migrates more than 700 kilometers north or south of the equator to breed during the rainy season. Breeding colonies contain between 50 – 2000 pairs that nest in shrubs or on islands.

The ibis thrives in large colonies near waterways. Inhabits wetlands such as swamps, swamps, riverbanks, floodplains, and both coastal and inland mud flats. It is also known to visit pastures, farmlands, and landfills.

It is such an adaptable feeder that it supplements its diet by feeding from landfills, helping it survive in temperate regions during the winter months.

The ibis is an omnivorous scavenger that feeds on insects such as grasshoppers and locusts, insect larvae, amphibians, and other small aquatic animals such as crustaceans, frogs, fish, and small reptiles. They have also been known to eat eggs, carrion, snakes, other small birds, and even refuse to eat. It will also use its long beak to probe the ground for invertebrates such as earthworms.

The female lays about 2 to 5 eggs that are incubated for 28 – 29 days by both parents. The eggs are generally laid during the rainy season or in flooded areas during the dry season.

Young ibis are born with dull white plumage, some neck feathers, and a small bill. Both parents will take turns feeding the chicks and guarding the nesting site until the chicks are large enough to defend and feed themselves. Ibis chicks hatch around 39-45 days and mature at 4-5 years of age.

The predators of the ibis include raccoons, snakes, and large cats. Some humans kill these birds for their feathers.

The Ibis will be considered an animal of Least Concern (LC).

Ibis as a sacred animal

The Ibis was once common in Egypt until 1850, where ancient Egyptians believed it to be the incarnation of Thoth the God of Wisdom and teacher of time. Many ibis have been found mummified in the tombs of pharaohs. It was also of practical use for the villagers, making the pools safe for bathing by feeding on the water snails that carried the bilharzia liver parasite.

It is an ancient species with fossil records dating back 60 million years.

Toth was the Egyptian god of wisdom and knowledge. Honored as the inventor of writing and founder of the branches of knowledge such as art, astronomy, medicine, law and magic, he was the patron god of scribes. The ancient Egyptians associated Toth with the moon and identified him as the son (or heart and tongue) of Ra, the supreme god of the sun.

According to legend, Thoth possessed books of wisdom that contained secret information about nature and magic and how to raise the dead. Although the books were hidden, some scribes had access to them. 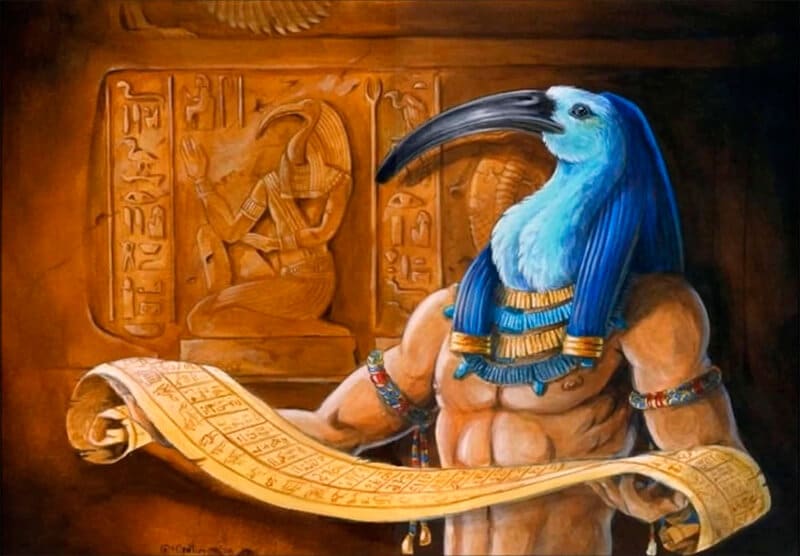 Representation of the Egyptian god Thoth associated with the ibis.

Thoth played a key role in Egyptian afterlife history. Known for being fair and impartial, Thoth judged the souls of the dead by weighing their hearts against a feather that represented the truth. After recording the results, he told Osiris, ruler of the underworld, if the individual had led a righteous life. In works of art, Thoth appears as a human with the head of an ibis.