The Numbat (Myrmecobius fasciatus), also called the ringed anteater, is a small endangered marsupial animal native to some parts of Australia. They have a long, sticky tongue that allows them to pick up termites, which they eat exclusively.

The Numbat is threatened by habitat loss and introduced predators such as foxes and wild cats. With an estimated population of less than 1500 individuals. 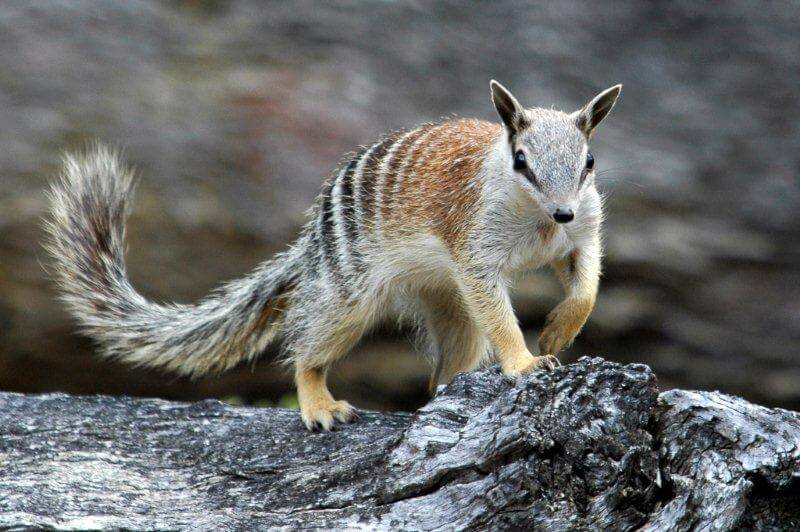 The numbat is an endangered animal.

The numbat is a small slender mammal with a small, pointed head and small, upright ears, four short legs with long claws, and a long bushy tail (similar to a bottle brush). It is greyish brown to reddish brown, with black and white stripes on the back and rump, beige underbelly and a long stripe on the back at the eyes.

It has a sticky, long, and thin tongue (about 10-11 cm long) that it uses to dive into narrow cavities in logs, litter, and small holes in the ground to collect termites.

The numbat does not have proper teeth like other mammals. They have broken “pegs” because they don’t chew their food. Like other dasyurid (carnivorous) marsupials, they do not have a proper pouch to carry their young. They have skin folds that cover breastfeeding babies on all four of the mother’s teats. The long hairs offer some warmth to the young in the bag.

The numbat needs a sufficient supply of termites and nesting / refuge sites to survive in the wild. They don’t need access to water because they get it from the termites they eat.

They are strictly diurnal, which means that they are only active during the day and their activity levels are closely related to those of termites. Being such small animals, the numbat do not have the strength to break through termite mounds, so they must rely on termites to be within arm’s reach, usually just below the surface of the soil or on top of the termite mound chambers.

A numbat resting in the sun

They are solitary animals, which means that they do not live with other members of their species. The only times you see numbats together is when a male and female have come together to mate, or there are youngsters still living with their mother. Because termites are small and difficult to find, they cannot share them with others, so they live alone.

Males can be very territorial and fight to protect food sources and females in their range. They also need to travel great distances to find termites, so their range is between 25 and 50 hectares.

also They rest in burrows either in hollow logs, trees, or underground in chambers that can be 1-2 m long. and They use shredded grass, bark, feathers, leaves, and flowers to make a nest at the end of their burrow. They can climb logs and trees, using their long, sharp claws, to find shelter.

The numbat lives in the Eucalyptus forests where old, fallen trees provide hollow logs for shelter, nesting sites, and foraging opportunities. They feed in open areas near the cover of shrubs. Trees provide some protection against raptors, but there needs to be space between the foliage for the sun to reach the forest floor and warm the ground for the termites to be active. The presence of the numbat is determined by the sufficient presence and availability of its prey source, termites. Therefore, they do not occur in areas that are too wet or too cold for termites to flourish.

During the hot summer months, they emerge from their underground burrows when the sun rises and forage in the surface layers of the soil in search of termites that are sensitive to temperature and light. When the temperature rises during the day the termites retreat deeper into the soil chambers away from the heat. This is also the time when the numbat return to their hollow logs or underground nests to escape the heat for several hours. In the afternoon, go back to look for termites until late afternoon.

In contrast, during the colder winter months, they get up late to feed and are only active for several hours during the warmest part of the day when termites are active.

Only one other Australian marsupial is also strictly diurnal, the Musky Rat Kangaroo, which lives in Queensland and feeds on fruits from the forest floor.

Because they are active during the day, they are at risk of being captured by raptors, snakes, and foxes. Their streaked hair helps them blend in against the forest floor. They also have eyes on opposite sides of their heads (like other prey species, like rabbits), allowing them to have a good view of things coming their way. They sit like meerkats to get a good look around and if they sense danger, they freeze (and stay very still until the danger has passed), or run under the cover of nearby bushes, trees, and logs and hide.

The numbers have dropped dramatically since the first European settlers arrived in Australia just 200 years ago. Their habitat has been cleared for agriculture and destroyed by forest fires. Also, they are hunted by introduced dogs, cats and foxes as they are slow and easy to catch.