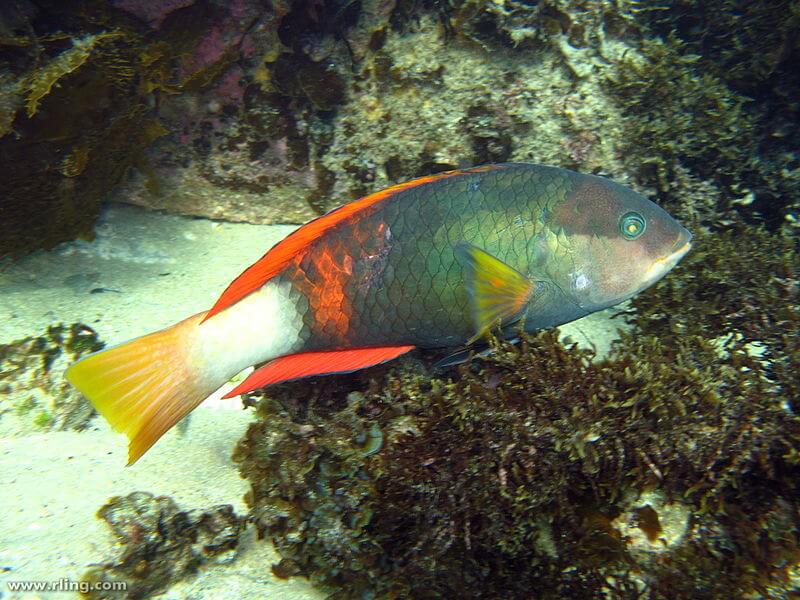 The labridae or wrasse (Labridae) is one of the most interesting and vibrantly colored fish in the ocean. They can be found in any number of color combinations and can add another dimension to a saltwater aquarium.

Caring for them can be difficult to maintain considering that most of them have very strict dietary, substrate and tankmate needs.

The Labridae family contains about 60 genera and more than 500 species of fish. These fish are found in all tropical regions of the world. They are often very colorful and many, though not all, are well suited to aquarium life. There are many variations within the family. The size of the fish varies from a few centimeters to more than 2 meters in length, some have cylindrical shapes while others have a deeper body. Even within the same species they can go through many changes in color and patterns, which has made them a challenge to identify. There are stories of two fish of the same species that look so different that they had originally been scientifically described as two separate species.

Like many marine fish, they primarily use their pectoral fins to move, but they also use their tailfin to quickly escape in an emergency. Many species bury themselves in the sand and therefore provide good agitation of the gravel. They are generally good for reef aquariums, although they can eat small crustaceans.

They appear in a wide range of colors, shapes, and sizes, often varying considerably within each species. This morphological diversity corresponds to the great variety of prey that is consumed. River labridae serve as piscivores, zooplanktivores, mollusks, herbivores, planktivores, polychaete predators, decapod crab predators, and coral predators, as well as many others. Many are organized in harem-based social systems, and hermaphroditism is common. Finally, as their diverse dietary habits suggest, they serve many important ecological functions on reefs in tropical and temperate regions around the world.

Most are quite small, usually under 20 cm. The smallest species, Minilabrus striatus from the Red Sea, it reaches a maximum length of only 4.5 cm. The genders Pseudocheilinus and Doratonotus they contain several other dwarf labridae. A kind, Conniella apterygiaIt is so small that it lacks even pelvic fins and a supporting skeleton. The biggest, Cheilinus undulatus, it can reach a length of about 2.3 m and weighs more than 150 kg.

how to identify this animals ?

These animals are most easily identified by their pointed snouts and prominent canine teeth at the front of the jaws, which often project forward. It is characterized by having a protractile mouth, cycloid scales, and a single continuous dorsal fin that lacks an obvious notch between the soft and spiny parts. The lateral line can be continuous or interrupted.

They show a myriad of colors and shapes. Razorfish are elongated and laterally compressed, while members of Cheilinus, Choerodon, and many Bodianus are large and robust. However, most are elongated and tapered at both ends, often referred to as ‘cigar-shaped’. Cigar-shaped fish are found in the genera Thalassoma, Halichoeres, and Labroides.

Often there is a considerable diversity of colors and shapes within each species. As in parrotfish, some progress through “phases”, with each phase corresponding to a change in morphology (shape and color). Dominant males (and sometimes females) are the most distinctively colored, with complex patterns of red, yellow, green, blue, and black. Subordinate males and females are smaller than dominant individuals and are often grayish in color with cryptic patterns. The coloration of the hatchlings ranges from bright yellow and orange to dull gray and brown, and some have camouflage patterns. Some exhibit sexual dimorphism (Differences between male and female).

The laridae are very showy and they are a very fun addition to a marine aquarium. They are usually very hardy and peaceful, however, there are exceptions. Some species are extremely difficult to keep in captivity, such as those of the Labroides genera. Some fish are social throughout their lives, others are social when young and become aggressive as adults, and still others are aggressive throughout their lives. Then there are the species that are territorial only with members of their own species.

They can be found in a wide variety of habitats, such as shores, underwater grassy areas, rocky or coral reefs, or open sandy bottoms. Many prefer specific environments. The Doratonotus, for example, prefers turtle grass beds, Los Hemipteronotus, mixed areas of turtle grass and sandy areas, and hogfish, rocky plains covered with weeds. Plankton feeders, such as Clepticus, often concentrate in large schools on reef fronts, in reef gaps, or in other areas where plankton is concentrated in the water column. However, some species, such as the slippery cock, can be found in a wide range of habitats.

The labridae occupy all tropical seas and penetrate considerable distances in temperate waters, reaching as far as northern Norway. Many temperate species of the genera Oxyjulius, Tautoga, Tautogolabrus, Semicossyphus and Labrus They are found in both the Atlantic and Pacific Oceans. The highest concentration occurs on the coasts of Australia, where some 165 species and 42 genera are represented.

These are fish that move quickly using a lot of energy, therefore they have a great appetite. With the exception of the cleanest fish, these fish are usually not very picky and adapt quickly to aquarium food. Although the diet varies from species to species, most eat mollusks and crustaceans in the wild. In the aquarium they should be fed all kinds of meaty foods, including brine shrimp and most frozen fish foods. Due to their large appetites, they will put a greater load on the aquarium and the quality of the water will need diligent attention.

Many of the young are cryptic in color to prevent predation, while others find protection among the tentacles of sea anemones. Almost all adults burrow into the sand at night to avoid predators. Some species look for crevices in reefs and produce a bag of foul-smelling mucus to deter predators while they sleep. The Hemipteronotus, Xyrichtys They also use the sand to protect themselves during the day while diving on the bottom. They are apparently quite agile in this environment, sometimes re-emerging several feet from the point of entry.

Like parrotfish, many of them use some of the most complex and unusual breeding systems known to fish. Men can be primary (male births) or secondary (women who have undergone a sex change). In some species there are no secondary males, while in others all individuals are born female (monandric) and change sex when necessary. In more complex systems, species are diandral – both primary and secondary males exist in the population. and In these species, individuals proceed through three distinct phases, marked by differences in color. also In fact, the color differences are so pronounced that for more than 200 years researchers considered some phases as distinct species.

Sexually immature youth represent the first phase. The second, known as the initial phase (IP), can include sexually mature males or females, which are impossible to distinguish without internal examination or observation during spawning. Male and female PIs can group spawning in some species. The terminal phase (TP) includes only mature males, showing bright colors. Male TPs generally dominate reproductive activity through a harem-based social system. The death of a PT man serves as a social signal for a PI woman to change her sex and behavior. The morphology of PI males can also change in response to the death of a TP male.

In some cases, PI males attempt to fertilize PI females by following a pair of TP males and PI females during spawning. In this behavior, PI males follow pairs at the spawning peak and release a large cloud of gametes in an attempt to overwhelm fertilization by the TP male. This is believed to increase the fertility (ability to produce offspring) of PI males. Male PIs are well equipped to scratch as they have larger gonads and are therefore capable of producing more gametes, whereas male TPs have smaller testes and rely on aggressiveness to deter other males. The higher volume of gametes produced by PI males is related to group spawning events with PI females, in which competition for fertilization is intense and more gametes are needed.

Some specific examples of mating systems demonstrate the complexity and variation of the phase system described above. For example, the cleanest, which is monandric (all individuals are born female), forms harems that are held together by male aggression towards subordinate females. With the death of the dominant male, the subordinate females and the new dominant female adopt aggressive male behavior within a few hours. Each individual rises one step in the hierarchy of domination and the last position is occupied by a minor.

If the new dominant female is able to resist attempts by neighboring males to take over the empty harem, she will become a fully functional male within two to four days. Other species that form harems are Cirrhilabrus temminckii, Cirrhilabrus jordani, Labroides bicolor, Hemipteronotus splendens, Pseudocheilinus hexataenia, and Macropharyngodon moyeri. The Caribbean species Halichoeres garnoti is also monandric, but the individuals do not exhibit relations of territoriality or conspicuous domination, nor do they use aggressive actions to maintain the sexual state.

Instead, size or some factor related to size determines which individual will fill the male role. In Halichoeres garnoti the males are larger than the females and both sexes behave similarly. While these examples focus on mating extremes, most species fall between the cleaner and Halichoeres garnoti systems in terms of the influence of social control on sex inversion. Other non-harem hermaphroditic species include Halichoeres bivittatus and Halichoeres poeyi, Halichoeres maculipinna, and possibly Thalassoma lunare. Finally, some species, such as Oxyjulis californica and Crenilabrus melops, do not follow the phase system at all, as they are not hermaphrodites, and there are likely more non-hermaphroditic species to be found.

They are the most abundant and conspicuous fish on tropical reefs around the world. Crabs are also an important element of the cold-water fish population on temperate reefs. They are the second largest family of marine fish and the third largest in the Perciformes order, with approximately 60 genera and approximately 500 species.